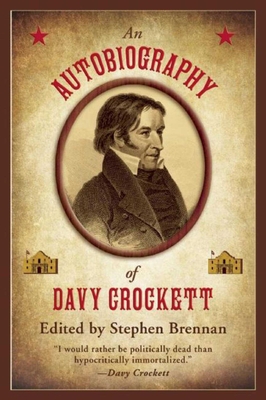 An Autobiography of Davy Crockett (Paperback)

The True Story of Davy Crockett, One of the Great American Folk Heroes.

There are few historical figures more legendary than Davy Crockett. From his humble beginnings as a boy in Tennessee to his death at the infamous Battle of the Alamo, Crockett is one of the most iconic figures in American history. His larger-than-life exploits and accomplishments have inspired countless plays, films, songs, books, and folk tales, both in his lifetime and in ours. But how much of what we know about him is true? An Autobiography of Davy Crockett reveals the man behind the myth, using primary sources to tell the story of this dedicated politician, brave frontiersman, and honored soldier in his own words.

In this book, Stephen Brennan draws from Crockett’s original letters and writings to craft a rich, firsthand narrative of the icon’s amazing life. Readers will hear stories of his growing up in a log cabin, his days as a scout for Andrew Jackson during the War of 1812, his time as a congressman in his home state, and his explosive fights with Jackson over the Indian Removal Act of 1830. Black and white drawings complement the text, illustrating the events and figures that made Davy Crockett the legend he is today.

Stephen Brennan is an editor, teacher, and playwright. He is the editor of The Gigantic Book of Sailing Stories, The Gigantic Book of Pirate Stories, and Classic Adventure Stories.
or support indie stores by buying on
(This book is on backorder)
Copyright © 2020 American Booksellers Association