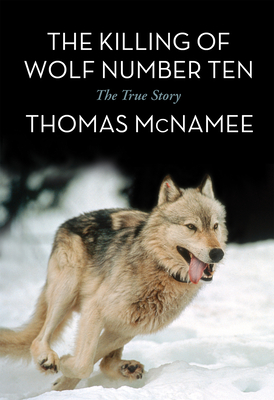 The Killing of Wolf Number Ten

A killer. A manhunt. The triumph of justice and of the wolf.
The greatest event in Yellowstone history.

Greater Yellowstone was the last great truly intact ecosystem in the temperate zones of the earth--until, in the 1920s, U.S. government agents exterminated its top predator, the gray wolf. With traps and rifles, even torching pups in their dens, the killing campaign was entirely successful. The howl of the "evil" wolf was heard no more. The "good" animals--elk, deer, bison--proliferated, until they too had to be "managed."

Two decades later, recognizing that ecosystems lacking their keystone predators tend to unravel, the visionary naturalist Aldo Leopold called for the return of the wolf to Yellowstone. It would take another fifty years for his vision to come true.

In the early 1990s, as the movement for Yellowstone wolf restoration gained momentum, rage against it grew apace. When at last, in February 1995, fifteen wolves were trapped in Alberta and brought to acclimation pens in Yellowstone, even then legal and political challenges continued. There was also a lot of talk in the bars about "shoot, shovel, and shut up."

While the wolves' enemies worked to return them to Canada, the biologists in charge of the project feared that the wolves might well return on their own. Once they were released, two packs remained in the national park, but one bore only one pup and the other none. The other, comprising Wolves Nine and Ten and Nine's yearling daughter, disappeared.

They were in fact heading home. As they emerged from protected federal land, an unemployed ne'er-do-well from Red Lodge, Montana, trained a high-powered rifle on Wolf Number Ten and shot him through the chest.

Number Nine dug a den next to the body of her mate, and gave birth to eight pups. The story of their rescue and the manhunt for the killer is the heart of The Killing of Wolf Number Ten.

Read this book, and if you are ever fortunate enough to hear the howling of Yellowstone wolves, you will always think of Wolves Nine and Ten. If you ever see a Yellowstone wolf, chance are it will be carrying their DNA.

The restoration of the wolf to Yellowstone is now recognized as one of conservation's greatest achievements, and Wolves Nine and Ten will always be known as its emblematic heroes.

Thomas McNamee was born in Memphis and grew up there and in New York City. He studied writing at Yale under the tutelage of Robert Penn Warren.In McNamee's early career he wrote mostly poetry, publishing in The New Yorker, The Yale Review, Southern Review, The Georgia Review, New England Review, Poetry, and a number of other literary journals.In 1984, his first book, The Grizzly Bear, was published. It has had several revised editions, most recently in 1997. The New York Times Book Review called it "a classic," and it is still considered the definitive work on its subject.In 1987 McNamee published Nature First: Keeping Our Wild Places and Wild Creatures Wild, a short book of conservation philosophy.In 1988 McNamee became a partner in a cattle ranch on the West Boulder River in Park County, Montana, just north of the Absaroka-Beartooth Wilderness and in 1993 he moved there to live full-time.In 1990 his Memphis based historical novel A Story of Deep Delight was published.Having been active for over a decade as an advocate for Yellowstone wolf reintroduction--while also working with others to reconcile that act with the region's ranchers--McNamee published The Return of the Wolf to Yellowstone in 1997. The Boston Globe called it "a deep-feeling and thoughtful book, steeped in wolf biology but informed by ecology, politics, and basic human nature...with [a] stringent sense of fairness." It was named by Amazon.com as one of sixteen all-time "conservation classics," alongside Rachel Carson's Silent Spring and Aldo Leopold's Sand County Almanac.McNamee and his wife moved to San Francisco in 1988, but spend part of every summer in Montana.He wrote the documentary Alexander Calder, which was broadcast on the PBS "American Masters" series in 1998 and received both a George W. Peabody Award and an Emmy.McNamee was a member of the board of Rare Conservation, which helps local communities establish enterprises that benefit from nature reserves without harming them. There he learned that farms harbor more biodiversity than all the nature reserves on the planet, and that led to an interest in food systems. His writing about food has appeared in Saveur, Food & Wine, Travel & Leisure, and Town & Country.He is the author of Alice Waters and Chez Panisse: The Romantic, Impractical, Often Eccentric, Ultimately Brilliant Making of a Food Revolution and The Man Who Changed the Way We Eat: Craig Claiborne and the American Food Renaissance, a biography of the father of modern American food.McNamee has also served on the board of directors of the Center for Education about Sustainable Agriculture (CUESA) in San Francisco.McNamee has also published travel writing, art criticism, political commentary, and, mainly in The New York Times Book Review, many book reviews.
Loading...
or support indie stores by buying on