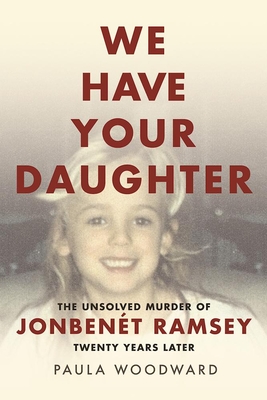 We Have Your Daughter (Hardcover)

New information from We Have Your Daughter has been revealed. Here is some of it.

The Family
As a top reporter in Denver, Paula Woodward was one of the few who had access to the Ramsey attorneys and thus the family. One of the prevailing questions in most of the television specials is about the bowl of pineapple on the kitchen table with Burke and Patsy's fingerprints on the bowl. That pineapple has been linked to JonBen t's death on some television broadcasts because of a reference in the autopsy to JonBen t having "fragments like pineapple" in her stomach. For more than a year after the murder, the pineapple theory behind her death was talked about. But when Boulder police finally had the material in her stomach tested at the University of Colorado in Boulder in October of 1997, they found out two months later in December, that the material was pineapple, plus grapes, grape skins, and cherries. That is food similar to that found in a fruit cocktail. What does that mean?

This is the type of exclusive and factual information you will find in We Have Your Daughter that allows you to challenge preconceived theories.

In 2010, Woodward interviewed Burke Ramsey specifically for her book.

- Burke discussed his family and the chaos surrounding the case. Woodward has obtained a Boulder Social Services Evaluation of the Child about Burke Ramsey that states "From the interview it is clear that Burke was not a witness to JonBen t's death." That raises more doubts about those who believe Burke was involved in his sister's death and again reinforces the information Woodward has researched and uncovered.
- In an interview with Burke Ramsey from 2010, he talks about his mom and how she taught him he could be optimistic or pessimistic about all the tragedies in their family. She chose positive for herself and so did he both believing it was important to find joy in each day.
- After Patsy Ramsey was diagnosed again with cancer in 2002, she began sharing private conversations with Paula in 2004 and 2005. This information was to be used after she died.
- John Ramsey gave Paula access to his personal journal as well as access to JonBen t's personal drawings and photos

The Handwriting Test Results
Handwriting is another key controversial part of this investigation and story. Paula has information and findings that show issues with how Boulder Police handled this aspect of the investigation. She discusses the results of the handwriting.

Exclusive Reports & Documents
Investigative Reporter Paula Woodward reviewed portions of thousands of police reports and documents for her book. Here are some highlights of her findings which she includes in the book, all of which affected the investigation and the public's view of the family.

Exclusive: The police report from the Boulder Police Officer who was FIRST to arrive on scene the morning of December 26, 1996 - before JonBen t's body was found and why he didn't find it.

Exclusive: In the police report from the BPD Detective who stayed on scene until JonBen t's body was found - Paula lists some discrepancies in that report.

Exclusive: Paula discovered what she calls a "deliberate campaign of disinformation" by law enforcement, based on information she received from her sources. She also cites issues with the media coverage, with outlets reporting information without verifying it. Woodward says much of the information and "anonymous leaks" reported were untrue and has all had an effect on the investigation. She cites several examples.

Exclusive: Paula found found that Boulder police withheld the results of the DNA tests that excluded the Ramsey family from both the Boulder district attorney and the public. The evidence that was submitted as DNA excluded the Ramseys.

In We Have Your Daughter: The Unsolved Murder of JonBen t Ramsey Twenty Years Later, Emmy Award-winning investigative journalist Paula Woodward offers an unprecedented, definitive, insider perspective on the twentieth anniversary of one of the most heinous, sensationalized, unsolved crimes in American history.

Here for the first time, Woodward examines conversations and information from all sides of those involved in the case. She shares information compiled during the twenty years she reported on the murder, including private conversations with law enforcement individuals directly involved in the case, their thoughts and dissections of what went wrong and right, and who they now believe is the killer.

Woodward has included drawings by JonBen t, letters from her teachers, and photographs that show a normal, happy six-year-old whose life was cut short in such a horrible manner. She shares portions of John Ramsey's private journal, where he wrote of his torment and grief in the aftermath of the murder. And she recounts personal conversations with JonBen t's mother prior to her death from cancer in 2006. JonBen t's brother Burke talks publicly about his sister's death and how it affected the family and his life.

We have Your Daughter is an extraordinary work of journalism, twenty years in the making. It depicts a family under siege with their guilt or innocence still openly questioned. This book allows readers to decide in this heartbreaking story - was it Ramsey or an unknown intruder?

Paula Woodward: Author and Emmy-award winning investigative reporter for news station, KUSA-TV in Denver for 32 years. Her stories prompted legislators to create new laws and sent criminals to jail. She has been recognized with many awards for her reporting, and has written for both the Rocky Mountain News and Denver Post.

Since retiring from broadcast journalism in 2009, she s been digging into and writing about unsolved murders, including the case of six-year-old JonBenet Ramsey, whose murder achieved national attention in 1996.