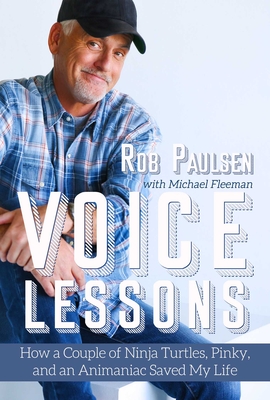 How a Couple of Ninja Turtles, Pinky, and an Animaniac Saved My Life

Rob Paulsen is one of Hollywood’s busiest, most talented, and most passionate performers. If you don’t know him by name, you will know him by the many characters he has brought to life: Pinky from Pinky and the Brain and Yakko from Animaniacs, the tough, but loveable, Raphael from the original animated Teenage Mutant Ninja Turtles, and many more.

So, you can imagine how terrifying it must have been when Rob was diagnosed with throat cancer, putting his entire livelihood in jeopardy and threatening to rob the world of all his loveable characters that filled our youth and adulthood with humor and delight.

Voice Lessons tells the heartwarming and life-affirming story of Rob’s experience with an aggressive cancer treatment and recovery regimen, which luckily led to a full recovery. Rob quickly returned to doing what he loves most, but with a much deeper appreciation of what he came so close to losing. His new lease on life inspired him to rededicate himself to his fans, particularly the new friends he made along the way: hundreds of sick children and their families. Rob said it best himself: “I can not only continue to make a living, but make a difference, and I can’t wait to use that on the biggest scale that I can.”

Praise For Voice Lessons: How a Couple of Ninja Turtles, Pinky, and an Animaniac Saved My Life…

"As one of the most gifted, prolific, and beloved actors in animation, it's no surprise that Rob Paulsen's book is fascinating, hugely entertaining, and laugh-out-loud funny. What I wasn't expecting was his candid, inspirational, and ultimately life-affirming account of facing devastating medical issues with such optimism, courage, and determination. I only regret I'm too old to play him in the inevitable movie version.” —Mark Hamill
— Mark Hamill

"Rob is more than relentlessly optimistic, he is a disciplined professional, skilled in the art of positivity. Every session with Rob is a master class in technique and collegiality. It is a privilege to work with him. It is an honor to know him. If I could design a humanitarian award in the world of voice acting, I’d call it the Rob and make it a statue of him with a mic sticking out of his head. And the first Rob goes to...Rob." —Sean Astin
— Sean Astin

“Having worked with Rob I knew of the deep well of talent he could draw upon to create the extraordinary range of characters from <i>Animaniacs</i>, to Pinky, to a couple of Ninja Turtles. But it isn’t until someone is forced to confront their own mortality that you truly see their mettle. In watching Rob fight his way back to life, I discovered he is a treasure." —Kevin Conroy
— Kevin Conroy

“Want to know about the world of voiceover from a professional? One who has acted in some of the best-known cartoons ever made? An actor who has been in demand for decades and has the respect of his peers? How about learning by example to face adversity and yet be triumphant? Then this is the book for you.” —Andrea Romano, Emmy award-winning casting and voice director
— Andrea Romano

“One of the most accomplished and beloved performers in animation, Rob doesn’t shy from shameless expression. In this memoir he goes even deeper, sharing his most personal struggles and discoveries along the way. It’s a celebration of entertainment and the way it connects us all. It’s an inspiring peek behind the magic, exposing the rawness of a performer’s needs, the fears and insecurity we all share. He shines so brightly, it’s like a lighthouse guiding your way on a journey you’ll be glad you took.” —Seth Green
— Seth Green

“I was stunned when I found out Rob had throat cancer. But true to form, he has NEVER been a victim. This page-turner will captivate and amaze you about the human spirit. Rob kills it, like his thousands of characters.” —Nancy Cartwright
— Nancy Cartwright

“Rob Paulsen is inspirational to me not only for his legendary characters and ginormous heart, but now also for his incredible tale of strength and survival. I love this man!!! Cancer can go narf itself.” —Chris Hardwick, the founder of Nerdist and host of The Talking Dead
— Chris Hardwick

“Pinky and The Brain fans love to debate about which one is the genius and which one’s insane. But as the guy who has shared a microphone with him for many years, I can tell you that in real life, Rob Paulsen is the genius, not only by virtue of his quick, facile mind and legendary skills behind the mic, but of his huge and open heart. As for this book, you’ll find that, while you’re enjoying what starts out as a fun and informative peek behind the curtain into our world, an honest tale of real courage, inner strength, and the redemptive power of human connection sneaks up on you, moves you to your core, and has you hooked to the very last page. While Brain may never admit to loving Pinky, I’m totally unashamed to proclaim, I LOVE ROB PAULSEN. You will, too.” —Maurice LaMarche a.k.a. The Brain
— Maurice LaMarche

"Man, does Rob have skills! I was filled with joy the first time I ever worked with the guy. His story is also one of bravest I've ever known, because he battled back so valiantly from cancer." —Billy West
— Billy West

“One of the most iconic, versatile, recognizable and hard-working voices in this industry, Rob has undoubtedly brought his magic through the world of animation, to the world of real life. He is truly one of the kindest, inspiring and deeply connected individuals you will ever meet. I get the honor of working with him consistently, and he has without a doubt changed my performances as a voice actress forever. Out of all the many voices that he has portrayed, it is his own that has been the greatest gift to this world.” —Kat Graham
— Kat Graham

Aside from his many current and past roles as a voice actor that total to over 2,000 credits, Rob Paulsen is the creator, host, and producer of the highly successful Talkin’ Toons podcast. He has received a Daytime Emmy, three Annie Awards, and a Peabody. In addition to his many appearances in the convention circuit, he is currently on tour with Animaniacs Live. Rob also frequently speaks on behalf of several charities benefiting children and military veterans.Michael Fleeman is a bestselling author, television writer-commentator, and college teacher. He covered the Hollywood beat, major crime stories, and sensational trials for People magazine and the Associated Press, and has written a dozen true crime books, including the New York Times bestseller The Stranger in My Bed. He's now on-air expert commentator and writer for In Plain Sight, a weekly true crime show on Investigation Discovery, and appears on episodes of Deep Undercover on Netflix. Fleeman also has taught journalism and mass communications as an adjunct professor at Cal State Northridge, El Camino Community College and UCLA Extension.
Loading...
or support indie stores by buying on