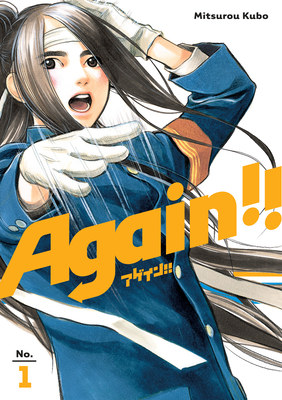 From the co-creator of "Yuri!!! on Ice" comes a dramatic, funny time-traveling high school story about what it means to cheer on a friend! What would you do if you had the chance to do everything... Again?

Kinichiro isn't even that bad. It's just that on the first day of high school, his narrow eyes made him look shifty, so people assumed he was trouble. Now it's graduation, and he's looking back on three years with no friends. He never even joined a club. But after a bloody collision and an accidental fall, he wakes up a high school freshman, with the chance to try it all over... AGAIN!!

Praise for Yuri!!! On Ice

“Kubo-sensei has done an amazing job of making [Yuri!!! on Ice] accessible and real. It’s not some dramatized, fabulous version of the figure skating world… It’s a very real depiction of the world I come from. have never seen any other skating film or production that was as realistic as Yuri!!! On Ice.” – Johnny Weir, two-time Olympian, 2008 World bronze medalist, two-time Grand Prix Final bronze medalist

“Yuri!!! On Ice [is] a triumph of concise storytelling. The creators pack every moment with layered meanings... Yuri!!! masterfully blends emotion and competition into every episode.” – Buzzfeed

“I meant to watch just one episode, [but] I stayed up and watched them all, more and more charmed.” – The New York Times Magazine

Mitsurou Kubo is a manga artist and the co-creator of the global smash hit anime Yuri!!! on Ice. She has traveled to dozens of conventions around the world to meet with fans. Again!! is her first manga to be published in English.
Loading...
or support indie stores by buying on