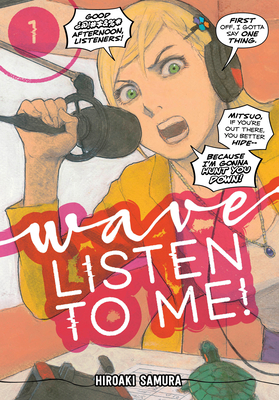 SHE HAS A FOUL MOUTH. SHE HAS A MICROPHONE. AND SHE'S MAD AS HELL.

Minare's tired of men, she's tired of work, and she's tired of being told she's too old to be single. One night, she gets drunk and unloads onto a kind stranger--but what she doesn't know is this stranger works in radio, and he wasn't just listening, he was recording. Hearing her own pitiful rambling broadcast the next day, Minare rushes to the studio and hijacks the mic. Now, for the first time, an entire city will have to listen to one woman's rage...

"A beautifully rendered romantic comedy that is sure to appeal to a broad audience… Wave, Listen to Me! is pretty much the antithesis of Blade of the Immortal… And it’s funny." -Comics Beat