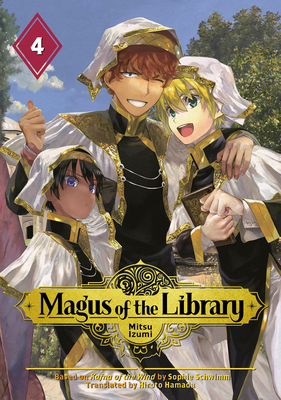 Magus of the Library 4

A story about a poor boy swept away by a kind library mage and the (literal) magic of reading, Magus of the Library is a beautifully-drawn, spirited fantasy adventure, like a Fullmetal Alchemist for all ages!

A Student Among Masters

Theo has returned to Aftzaak, the magisterial City of Books. Passing the exams to become a kafna was hard enough. Now he has to compete against his fellow trainees--ﬁghters and geniuses one and all--to prove that he has what it takes to achieve his dreams and ascend to the Central Library's elite. Under the watchful eyes of his wise seniors and teachers, including his youthful mentor Sedona, Theo begins to awaken to the sublime fate and impossible challenges that history has prepared for him...

The creator of many short manga stories, Mitsu Izumi's first serialized manga was an adaptation of the hit anime anohana: The Flower We Saw That Day in 2012, followed by the original series 7th Garden, which was published in English by Viz Media. Magus of the Library is her latest series, now being released in English by Kodansha Comics.
Loading...
or support indie stores by buying on