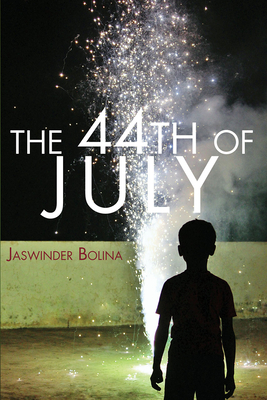 This is a book about Americans. Not the ones brunching in Park Slope or farming in Wranglers or trading synergies in a boardroom; they are not executives or socialites. They are not the salt of the earth. Nor are they huddled masses yearning to breathe free. These are the others of the everyday, the Americans no one sees. These are the brown and bland ones who understand the good, tough money in working a double, who know which end of a joint to hit. They can find Karachi on a map. They know a shortcut to Ikea. They can land a punchline. These are their poems.
In The 44th of July, Jaswinder Bolina offers bracing and often humorous reflections on American culture through the lens of an alienated outsider at a deliberately uncomfortable distance that puts the oddities of the culture on full display. Exploring the nuances of life in an America that doesn’t treat you as one of its own, yet whose benefits still touch your life, these exquisitely crafted poems sing in a kaleidoscopic collaging of language the mundane, yet surreal experience of being in between a cultural heritage of migration and poverty and daily life in a discriminatory yet prosperous nation.  Both complicit in global capitalism and victims of the inequality that makes it possible, these are the Americans who are caught in a system with no clear place for them. Bolina opens the space to include the excluded, bringing voice and embodied consciousness to experiences that are essential to Americanness, but get removed from view in the chasms between self and other, immigrant and citizen.

Praise For The 44th of July…

"Cynical, impassioned, and careening into furious flights of fact and fancy, Bolina's third collection is animated by a vision of a trainwrecked America. Though the racism, violence, and consumer culture that Bolina rails against is nothing new, it's impossible not to read this book as a work of activism in protest against the political upheavals of the last two years. And yet, with a finally tuned ear for the music of our Internet Age language, Bolina manages to make it all sort of fun, and even funny. . . .  In some of the darkest and bitterest political poems of our dark and bitter age, Bolina gives voice to the offline rage of those who are screaming to make America good again, if it ever was."
— NPR

“Bolina writes socially aware poems mixing aesthetics with politics in emotionally charged language. It is poetry of bridging, connecting, and seeing to retain clarity and evoke awakening. . . . These attentive and subtle poems engage language expressively to address pressing realities, brilliantly demonstrating that poetry is action. Recommended for all poetry readers.”

"Sonically powerful and careful in their word choice, these poems create a musical texture throughout. . . . Bolina’s poems are acute, playful works that precisely capture the surreality of our current political moment.”
— Publishers Weekly

"Cynical, impassioned, and careening into furious flights of fact and fancy, Bolina's third collection is animated by a vision of a trainwrecked America. . . . And yet, with a finally tuned ear for the music of our Internet Age language, Bolina manages to make it all sort of fun, and even funny, in a schadenfreude kind of way."
— WBUR News

"His speakers shifts from witness to outsider to stealth transgressor, while his poems move quietly—measured and musical—with rhythms so deft the criticisms and wit unfold unexpectedly. Through his deliberate and attentive forms, he echoes the strategic footwork immigrants and POC master to navigate and survive the United States . . . . His representations of this nation are vivid, chilling and accurate—balanced but made all the more real by the humor."
— The Arkansas International

Jaswinder Bolina teaches creative writing in the Department of English at the University of Miami.
Loading...
or
Not Currently Available for Direct Purchase