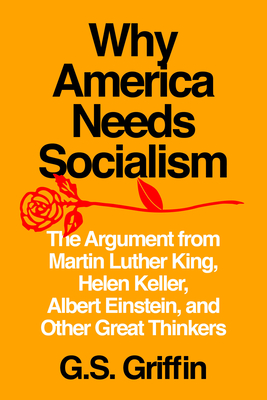 "The debate over socialism in America is long overdue. This timely book is a good place to start Don't miss it "--Cornel West

"This timely book shows how many notable Americans criticized capitalism and endorsed socialism. Just emerging from Cold War taboos surrounding these issues, we confront a global capitalism with its deep flaws (inequality, instability, injustice) now in very blatant forms. Considering capitalism's failures and the socialist alternatives, we can learn much here from how other thoughtful Americans grasped the need for a transition to socialism."--Richard D. Wolff

"A little gem of a book In straightforward prose, Griffin makes a strong case for thoroughly democratizing our economy or, in other words, for establishing the cooperative and socializing arrangements we could call socialism."--Frances Fox Piven

"At a moment when we know ecological sustainability and capitalism are incompatible, answering Why America Needs Socialism is an essential piece to how we'll move forward. When we can use prominent voices, as Garrett has, to contribute to the dialogue, it helps us to get a foot in a door that's been sealed shut by Cold War-era propaganda. As folks gain more and more access to information, they are able to debunk myths and misinformation. We're seeing the support for socialism grow every day as a result. G.S. Griffin's book can be another needed contribution to that developing discourse--a discourse that absolutely must lead to action."--Mimi SoltysikFormer Presidential Candidate and National Co-Chair of the Socialist Party USA

Due to the massive inequality and other issues caused by post-World War II capitalism, today's young people are embracing socialism, which has been reflected in the U.S. by the ascendancy of politicians such as Bernie Sanders and Alexandria Ocasio-Cortez. This is not a new trend, however, as historical icons such as Albert Einstein, Martin Luther King, Jr., Helen Keller, and Mahatma Gandhi, among many others, spoke boldly against capitalism and in support of socialist ideals.

Why America Needs Socialismpresents a contemporary case for socialism built on the words and ideas of history's greatest leaders, thinkers, and artists. Exploring their views and connecting them to present day struggles, this book is crucial reading for anyone seeking to learn from the past in order to change today's world in revolutionary ways.

G.S. Griffin is an activist and political writer in Kansas City, Missouri. He is a co-founder of the Kansas City chapter of the Democratic Socialists of America, co-founded a cooperative to support progressive causes and candidates, and works in political advocacy at Communities Creating Opportunity.
Loading...
or support indie stores by buying on