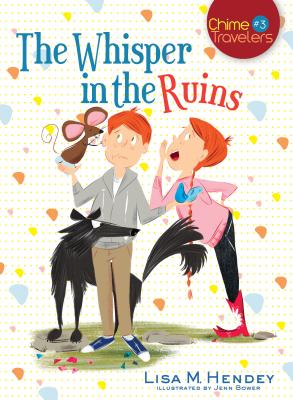 The Whisper in the Ruins, 3 (Chime Travelers #3)

Somebody is angry, and they're taking it out on St. Anne's. Patrick and his twin sister Katie are shocked when they learn that someone threw a brick through the St. Francis of Assisi stained glass window at St. Anne's. What would make someone angry enough to damage the beautiful old window? And how will the church ever be able to repair it? The twins want to investigate, but before Patrick can learn anything, he's swept into another adventure--in the year 1205 Patrick's second Chime Travel journey takes him back to Assisi, where he meets a brave young man who wants to leave his family's wealth behind so he can answer God's call in his life. Young Francis invites Patrick to help him repair an old church, but Francis's father is furious with his son's decision and will do almost anything to stop him. Can Francis and Patrick follow God's command to rebuild the church? And will Patrick's time in Assisi help him solve the mystery of the broken window at St. Anne's? Book 3 in the Chime Travelers series, exciting new chapter books ideal for children in grades 2-4.

Lisa M. Hendey is the founder and editor of CatholicMom.com and the bestselling author of The Grace of Yes: Eight Virtues for Generous Living and The Handbook for Catholic Moms. A frequent radio and television contributor and producer, Lisa has appeared on EWTN, CatholicTV, Relevant Radio, Immaculate Heart Radio, KNXT TV, and other Catholic media platforms. She travels internationally, giving workshops on faith, family, and Catholic new media topics.
Loading...
or support indie stores by buying on