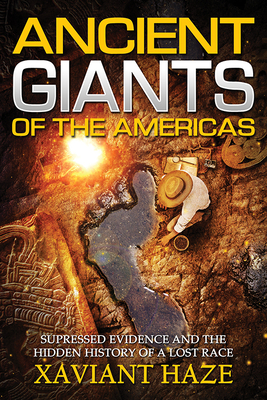 Ancient Giants of the Americas (Paperback)

Suppressed Evidence and the Hidden History of a Lost Race

Did a race of ancient giants once inhabit the Americas?

Ancient Giants of the Americas reveals an array of astounding truths, including:

Xaviant Haze is a researcher, teacher, and archivist of ancient manuscripts with a keen interest in lost civilizations, ancient aliens, ancient giants, and the myths of the prediluvian world. He is the author of 10 books, including The Suppressed History of America. XaviantVision.com, his free online library, is home to one of the most complete collections of metaphysical, spiritual, and alternative history books and podcasts in the world, with links and resources to all major works in the field. He resides in a haunted house in Miami, Florida.


Praise For Ancient Giants of the Americas: Suppressed Evidence and the Hidden History of a Lost Race…

"Xaviant Haze takes us on a tour of the Americas looking for evidence of a lost race of incredibly tall humans. From the accounts of early explorers, to archaeological finds, and searching through the archives, this is an excellent survey of what has been discovered so far, and it raises some uncomfortable questions that have yet to be answered by academia." --Hugh Newman, co-author of Giants On Record
— Reviews

"Haze covers all the bases in his search for giants in the Americas. From Canada to Tierra El Fuego, he chronicles the many explorers' tales of encounters with astonishingly tall natives. A fascinating and well-researched addition to the books on giants." --David Hatcher Childress, author of Technology of the Gods
— Reviews
or
Buy Here
Copyright © 2020 American Booksellers Association