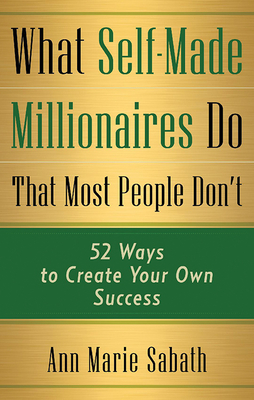 What Self-Made Millionaires Do That Most People Don't

52 Ways to Create Your Own Success

Confucius said that a thousand-mile journey begins with a single step. The same principle applies to becoming a self-made millionaire, except this journey is a little shorter, comprising just 52 common sense practices.

Featuring interviews with a wide-ranging list of self-made millionaires, you will be astonished to see how anyone can achieve this status by creating the right mindset. You will learn how white-collar professionals, blue-collar workers, small business owners, even teenagers alike have joined this million-dollar net worth club by methodically and consistently putting into practice the self-made millionaire game plan revealed in this book.

In What Self-Made Millionaires Do that Most People Don't, Ann Marie Sabath makes it easy for you to implement these simple strategies by posing a question at the end of each section to help you begin your own self-made millionaire journey.

What Self-Made Millionaires Do that Most People Don't will teach you:

Praise For What Self-Made Millionaires Do That Most People Don't: 52 Ways to Create Your Own Success…

"Ann Marie Sabath has entered a field crowded with 'get rich quick' books. What Self-Made Millionaires Do That Most People Don't is the opposite -- it's a get rich slow book. Instead of grandiose claims, the author provides compelling stories and distills practical advice in short, easy-to-digest chapters. Whatever your goals, What Self-Made Millionaires Do That Most People Don't can get you on a path that maximizes your chances of success, one step and one week at a time." --Steve Bennett, Founder and Creative Director, AuthorBytes
— Reviews

"The author brilliantly breaks down how to achieve millionaire status into 52 enticingly achievable secrets. It led me to conclude that I could focus on mastering one of these secrets per week and in one-year's time, be well on my way to greater success." --David Kramer, Coauthor, The $500 Cup of Coffee
— Reviews

"While there's no prescribed path to becoming a millionaire, this book is as close as it comes. With great detail, Ann Marie breaks down the commonalities, habits and secrets that distinguish successful people from the rest." --Douglas A. Boneparth, CFP®, Coauthor, The Millennial Money Fix
— Reviews

Ann Marie Sabath is president of At Ease Inc., a nationally recognized protocol and etiquette firm. She has trained more than 90,000 individuals at companies such as Fidelity Investments, Monster.com, CVS Pharmacy/Caremark, Deloitte &amp; Touche, Baird Investments and Marriott International. The first and second editions of Business Etiquette have been recognized by the Oprah Winfrey Show, the New York Times, Entrepreneur Magazine, the Seattle Times, and the Cincinnati Enquirer, among many other newspapers, radio and television stations. Sabath has been profiled in a wide variety of media, including Forbes, the Wall Street Journal and USA Today. She divides her time between New York and Cincinnati.