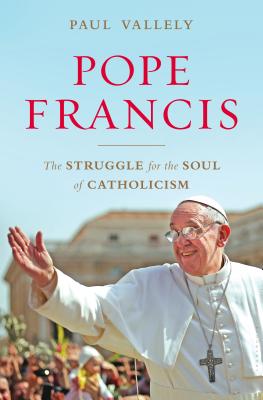 The Struggle for the Soul of Catholicism

For the past two years Pope Francis has enchanted and bewildered the world in equal measure with his compassion and his contradictions. Expanding greatly on his acclaimed earlier book Pope Francis: Untying the Knots, Paul Vallely reexamines the complex past of Jorge Mario Bertoglio and adds nine new chapters, revealing many untold, behind-the-scenes stories from his first years in office that explain this Pope of paradoxes.

Vallely lays bare the intrigue and in-fighting surrounding Francis's attempt to cleanse the scandal-ridden Vatican Bank. He unveils the ambition and arrogance of top bureaucrats resisting the Pope's reform of the Roman Curia, as well as the hidden opposition at the highest levels that is preventing the Church from tackling the sex abuse crisis. He explains the ambivalence of Pope Francis towards the role of women in the Church, which has frustrated American Catholic women in particular. And Vallely charts the battle lines that are being drawn between Francis and conservatives and traditionalists talking of schism in this struggle for the soul of the Catholic Church. Consistently Francis has show a willingness to discuss issues previously considered taboo, such as the ban on those who divorce and remarry receiving Communion, his liberal instincts outraging traditionalists in the Vatican and especially in the Church hierarchy in the United States. At the same time, many of his statements have reassured conservative elements that he is not, in fact, as radical as he might appear.

Behind the icon of simplicity that Pope Francis projects is a steely and sophisticated politician who has learned from the many mistakes of his past. The Pope with the winning smile was previously a bitterly divisive figure. In his decade as leader of Argentina's Jesuits left that religious order deeply split. His behavior during Argentina's Dirty War, when military death squads snatched innocent people from the streets, raised serious questions. Yet after a period of exile and what he has revealed as "a time of great interior crisis" he underwent an extraordinary transformation--on which Vallely sheds new and fascinating light. The man who had been a strict conservative authoritarian was radically converted into a listening participative leader who became Bishop of the Slums, making enemies among Argentina's political classes in the process.


Praise For Pope Francis: The Struggle for the Soul of Catholicism…

“No biography, however diligent, can capture someone's interior life. But what this book does demonstrate is that Pope Francis is a tougher, more complex figure than meets the eye . . . Anybody who reads this book will eagerly await his next move.” —The Economist

“Vallely’s portrait is richly detailed, and he provides the most thorough account to date of the internal politics of the Francis papacy.” —The Washington Post

“The indispensable English-language biography of the Pope.” —Andrew Sullivan, The Daily Dish

“Paul Vallely's biography of Francis . . . stands, in terms of seriousness of purpose and depth of understanding, head and shoulders above other recent rushed cuttings jobs.” —Peter Stanford, The Sunday Times

“By the end of this stint of reviewing I have read through 10 biographies of one sort or another of the new Bishop of Rome. This emboldens me to say, without hesitation, that Vallely's is undoubtedly the most satisfactory of an otherwise lacklustre bunch. . . Vallely, as befits a long-time journalist, has done the legwork . . . Read this book, forget the rest.” —Michael Walsh, The Tablet

“Discovering a pope with a controversial past and a revolutionary style of leadership in the present, Vallely provides a highly worthwhile resource for Catholics and non-Catholics alike.” —starred review, Kirkus

“Paul Vallely has produced a deeply nuanced and insightful portrait of perhaps the most influential person in the world today.” —Examiner.com

Paul Vallely has an international reputation as a commentator on religion, ethics and society. As a journalist he has produced award-winning reporting from 30 countries over three decades for which he was nominated for the UN Media Peace Prize. As an activist on international development he has worked with Bob Geldof and Bono and was co-author of Our Common Interest, the report of The Prime Minister's Commission for Africa. As a writer his books include The New Politics: Catholic Social Teaching for the 21st century and Bad Samaritans: First World Ethics and Third World Debt. He writes on political, cultural and ethical matters in the New York Times, the Sunday Times, Newsweek, The Guardian, The Independent on Sunday, the Church Times, Third Way and The Tablet. He is now Visiting Professor in Public Ethics and Media at the University of Chester, and also a Senior Honorary Fellow at the Brooks World Poverty Institute at the University of Manchester. Vallely has been an adviser to the Catholic Bishops of England and Wales and lives in Manchester with his wife and son.
Please visit www.paulvallely.com