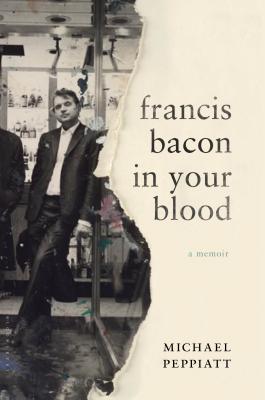 Francis Bacon in Your Blood (Hardcover)

In June of 1963, when Michael Peppiatt first met Francis Bacon, the former was a college boy at Cambridge, the latter already a famous painter, more than thirty years his senior. And yet, Peppiatt was welcomed into the volatile artist's world; Bacon, considered by many to be "mad, bad, and dangerous to know," proved himself a devoted friend and father figure, even amidst the drinking and gambling.

Though Peppiatt would later write perhaps the definitive biography of Bacon, his sharply drawn memoir has a different vigor, revealing the artist at his most intimate and indiscreet, and his London and Paris milieus in all their seediness and splendor. Bacon is felt with immediacy, as Peppiatt draws from contemporary diaries and records of their time together, giving us the story of a friendship, and a new perspective on an artist of enduring fascination.

Michael Peppiatt studied at the University of Cambridge, where he began his career and an art writer by writing exhibition reviews for the Observer. In an international career as a writer and curator, he has curated numerous exhibitions of Francis Bacon's and other artists' work and been published in Le Monde, the New York Times, the Financial Times, Art News and Art International, which he bought and relaunched in 1985. In 2005, he was awarded a Ph.D. by the University of Cambridge for his published work in the field of twentieth-century art. He is a member of the Society of Authors and the Royal Society of Literature, and in 2010 he joined the international board of the Palazzo delle Esposizioni in Rome.

Praise For Francis Bacon in Your Blood: A Memoir…

“Pleasurable reading . . . Skillfully sewn together . . . [Peppiatt] had a 30-year acquaintance with his subject and made good use of it.” —The New York Times Book Review on Francis Bacon: Anatomy of an Enigma, Notable Books of the Year

“[Peppiatt] makes you feel Bacon as a living presence.” —Salon on Francis Bacon: Anatomy of an Enigma

“Michael Peppiatt's biography has long been viewed by Bacon scholars as the definitive life of a fascinatingly flawed figure . . . There is no denying the often disturbing cumulative force with which Bacon -- the man, the artist and, towards the end of his life, the commercial wonder -- is presented. As an examination of his life and art, Anatomy of an Enigma is superb, but arguably it's even better as a portrait of the Soho demimonde in which Bacon thrived, vividly capturing the grubby ennui of postwar Britain that suited his grim sensibilities so well.” —The Guardian on Francis Bacon: Anatomy of an Enigma