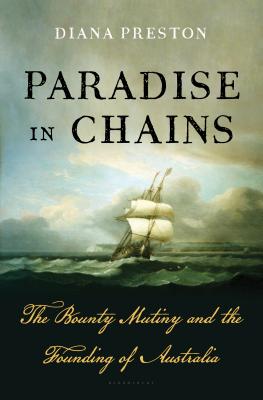 The Bounty Mutiny and the Founding of Australia

Celebrated historian Diana Preston presents betrayals, escapes, and survival at sea in her account of the mutiny of the Bounty and the flight of convicts from the Australian penal colony.

The story of the mutiny of the Bounty and William Bligh and his men's survival on the open ocean for 48 days and 3,618 miles has become the stuff of legend. But few realize that Bligh's escape across the seas was not the only open-boat journey in that era of British exploration and colonization. Indeed, 9 convicts from the Australian penal colony, led by Mary Bryant, also traveled 3,250 miles across the open ocean and some uncharted seas to land at the same port Bligh had reached only months before.

In this meticulously researched dual narrative of survival, acclaimed historian Diana Preston provides the background and context to explain the thrilling open-boat voyages each party survived and the Pacific Island nations each encountered on their journey to safety. Through this deep-dive, readers come to understand the Pacific Islands as they were and as they were perceived, and how these seemingly utopian lands became a place where mutineers, convicts, and eventually the natives themselves, were chained.


Praise For Paradise in Chains: The Bounty Mutiny and the Founding of Australia…

"Grounded in a familiar assortment of printed manuscripts and secondary sources, the book is comprehensive in scope, cogently written and amply detailed . . . The chief contribution of ‘Paradise in Chains’ lies in the contrast it offers in the relations between natives and newcomers." - Wall Street Journal

"Ultimately, this is a book about survival, and the author engagingly recounts the nearly impossible task of trying to establish a penal colony with few supplies and poor agricultural conditions. Preston shines in her description of the true nature of Capt. Bligh . . . A wonderful look into the beginnings of Australia and the remarkable strength of the survivors of these dangerous voyages." - Kirkus Reviews

"Tracking the paths of the infamous Bounty and of Mary Bryant, a convict transported to the New South Wales penal colony who later escaped, Preston colorfully evokes the claustrophobia and isolation faced by seafarers . . . Preston's heart is with the oceanic adventurers, and readers will be titillated by tales of derring-do." - Publishers Weekly

"The history lover will find much in this book. This story is an adventure on a grand scale, directed by powerful institutions but told in the actions of colorful characters." - The New York Journal of Books

"History at its best: lively, vivid and thorough. Author Diana Preston delivers that rare combination of incredible research with clear writing to produce a book that holds your attention and makes you want to keep reading well into the night." - Michael J. Tougias, New York Times bestselling author and coauthor of RESCUE ON THE BOUNTY, THE FINEST HOURS, and SO CLOSE TO HOME

"Preston deftly and graphically weaves the complex stories--hitherto kept distinct--of these land, sea and air innovations into a connected narrative. For the first time, readers can grasp the mounting cognitive assault on civilians, soldiers and politicians of the curious clustering of events that spring." - The New York Times Book Review on A HIGHER FORM OF KILLING

"[A] gripping and excellent book . . . Preston, whose previous books include a history of the sinking of the Lusitania, tells this grim story well. Her extensive archival research fills in the historical chronology with well-selected quotations from personal accounts of participants at every level of civilian and military life and of government." - The Washington Post on A HIGHER FORM OF KILLING

Diana Preston is an Oxford-trained historian and the author of A First Rate Tragedy, The Boxer Rebellion, Lusitania: An Epic Tragedy, and Before the Fallout: From Marie Curie to Hiroshima, which won the 2006 Los Angeles Times Book Prize for Science and Technology. With her husband, Michael, she has coauthored A Pirate of Exquisite Mind and Taj Mahal. She lives in London, England.
Loading...
or
Not Currently Available for Direct Purchase