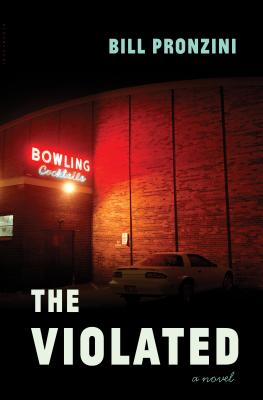 A new stand-alone thriller by an acclaimed master of the genre and author of the Nameless Detective series.

Bill Pronzini is crime-writing royalty. His more than eighty published novels have won or been nominated for Edgar, Hammett, Anthony, Shamus, and Macavity awards--a clean sweep of the crime fiction award field--and received rave reviews from critics. He crafts masterful stories, often from multiple perspectives, in which the human condition is on full display.

The Violated is no exception. In Echo Park, in the small town of Santa Rita, California, the mutilated body of Martin Torrey is found by two passersby. A registered sex offender, Torrey has been a suspect in a string of recent rapes, and instant suspicion for his murder falls on the relatives and friends of the women attacked. Police chief Griffin Kells and detective Robert Ortiz are under increasing pressure from the public and from a mayor demanding results in a case that has no easy solution. Pronzini cleverly unfolds the case through alternating perspectives--Martin Torrey's wife, caught between her grief and the fear her husband was guilty; the outraged husbands of the women violated; the enterprising editor of the local paper; the mayor concerned most with his own ratings; the detectives, often spinning in circles--until a surprising break leads to a completely unexpected conclusion. The Violated is Bill Pronzini at the height of his storytelling powers.

Praise For The Violated: A Novel…

"[A]bsorbing . . . Mr. Pronzini tells a larger story than the expected battle between cops and criminals. In the words of the most conscientious Santa Rita police officer: 'What bothered me most of all . . . were the dark consequences of the crimes.' They 'couldn’t be erased by the solutions.'" - Wall Street Journal

"Pronzini is a pro." - The New York Times

"Pronzini is a master of suspense." - Los Angeles Times

"THE VIOLATED is a smartly written thriller that probes emotions experienced by victims and all those touched by the crimes against them. No one, not even the cops -- who see crime daily -- comes away unscathed. In his newest fast-paced mystery, Bill Pronzini tries to help readers take a step toward a better understanding of and a higher empathy for people recovering from violence. Well done, sir. Very well done." - Bookreporter

"This is a psychological novel dressed up in a thriller suit, which means the teeth are showing, and Pronzini's skill keeps things moving. Another satisfying tale from a crime master." - Booklist

"This most recent standalone from Mr. Pronzini is right up there with the best of them . . . I must say that each [chapter] was conspicuously in the believable voice of the speaker, not an easy task! . . . The multiple p.o.v. chapters include other victims and their spouses, each one entirely true to their characters . . . An excellent addition to this author's oeuvre, it is highly recommended." - Midwest Book Review

"His novels are packed with adventure, fresh characterization, and minute-by-minute suspense." - Chicago Tribune

"Pronzini's book, with its smooth writing, crisp dialogue, deft characterization and subtly ambiguous story line, puts the lie to the facile distinction between 'literary' and genre fiction. Crime may figure in the tale, but if this is 'just a crime novel,' then so is Crime and Punishment." - Philadelphia Inquirer on THE CRIMES OF JORDAN WISE

"Pronzini is the master of the shivery, spine-tingling it-could-happen suspense story." - Publishers Weekly

"After 66 novels, including the distinguished Nameless Detective series, Pronzini's energy seems undiminished and his cool intelligence as appealing as ever." - Kirkus Reviews on THE CRIMES OF JORDAN WISE