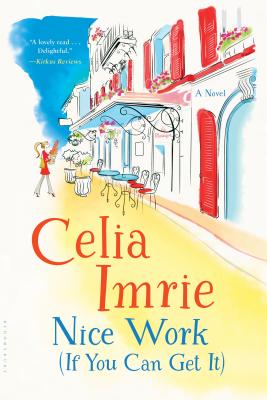 Nice Work (If You Can Get It)

Witty and enchanting, the second novel from the well-loved actress and author of Not Quite Nicefollows the hilarious exploits of retired expats in the South of France.

Somewhere on the French Riviera, tucked between glitzy Monte Carlo and Cannes' red carpets, lies the pretty town of Bellevue-Sur-Mer. Sheltered from the glittering melee, it is home to many an expat--including an enterprising team who plan to open a new restaurant.

Snapping up a local property and throwing themselves into preparations, Theresa, Carol, William and Benjamin's plans are proceeding unnervingly well. But when Theresa encounters a mysterious intruder, she begins to wonder what secrets the building is concealing.

Meanwhile Sally, an actress who gave up the stage to live in quiet anonymity, has decided not to be involved. The famous Cannes Film Festival is on and she is far too busy entertaining unexpected visitors from her past, and an intriguingly handsome Russian.

As the razzmatazz of the festival begins to spill over into Bellevue-Sur-Mer, its inhabitants become entangled in complex love triangles and conflicting business interests. With the race on to get the restaurant open in time, the gang find themselves knee-deep in skulduggery, and realize they can no longer tell who's nasty . . . and who's nice.


Praise For Nice Work (If You Can Get It)…

"A lovely read . . . A story that gradually unfolds into something delightful." - Kirkus Reviews

"Fun . . . Her work has definite joie de vivre and a sunny, good-natured feel." —The Daily Mail

"A very witty novel by a very witty woman. Hugely entertaining." —Julian Fellowes, creator of DOWNTON ABBEY, on NOT QUITE NICE

"A warm, light-hearted, fast-paced tale that fans of Peter Mayle will enjoy." —Joanne Harris, author of CHOCOLAT, on NOT QUITE NICE

"A delicious piece of entertainment . . . The characters are a hoot and their antics are hilarious; even better, Theresa is a fabulous cook and Imrie includes the recipes of her signature dishes." —The Times on NOT QUITE NICE

"This debut from national treasure actress Celia perfectly captures the colour of ex-pat life and the glitz and glamour of the South of France. A shaft of early summer sunshine, a funny, spirited read." —The Daily Mail on NOT QUITE NICE

"A hugely enjoyable romp of a novel with eccentric characters, a delightful background and a savoury tang of crime." —Katie Fforde, author of A PERFECT PROPOSAL, on NOT QUITE NICE

"A comic caper set among the tangled lives of a group of expats in a southern French village." —The Observer on NOT QUITE NICE

"Utterly delicious in every way." —Joanna Lumley, actress, on NOT QUITE NICE

Celia Imrie is an Olivier award-winning actress best known for her parts in the films Calendar Girls and Nanny McPhee. In February 2015 she returns as Madge in The Second Best Exotic Marigold Hotel. Her roles on stage include Dotty in Noises Off and Mrs Tilehouse in The Sea, and, on television, Diana in After You've Gone, Vera in A Dark Adapted Eye and Miss Babs in Acorn Antiques. Last year she brought her cabaret/revue show Laughing Matters to Crazy Coqs and then to the St James Theatre. Her autobiography, The Happy Hoofer, was published in 2011.