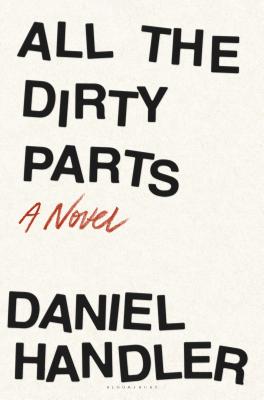 All the Dirty Parts

Cole is a boy in high school. He runs cross country, he sketches, he jokes around with friends. But none of this quite matters next to the allure of sex. "Let me put it this way," he says. "Draw a number line, with zero is you never think about sex and ten is, it’s all you think about, and while you are drawing the line, I am thinking about sex."

Cole fantasizes about whomever he’s looking at. He consumes and shares pornography. And he sleeps with a lot of girls, which is beginning to earn him a not-quite-savory reputation around school. This leaves him adrift with only his best friend for company, and then something startling starts to happen between them that might be what he’s been after all this time—and then he meets Grisaille.


All the Dirty Parts is an unblinking take on teenage desire in a culture of unrelenting explicitness and shunted communication, where sex feels like love, but no one knows what love feels like. With short chapters in the style of Jenny Offill or Mary Robison, Daniel Handler gives us a tender, brutal, funny, intoxicating portrait of an age when the lens of sex tilts the world. "There are love stories galore," Cole tells us, "This isn’t that. The story I’m typing is all the dirty parts."


Praise For All the Dirty Parts…

"Commendable . . . A coming-of-age story that doesn’t shy away from the omnipresence of smut." - New York Times Book Review

"The language is what's sensuous here, and Handler often dips his toe into Joyce--never a full descent into the Irishman's decadence, but the two are kinsmen in how fast their prose moves, at the speed of rushing blood." - San Francisco Chronicle

"A fascinating, profane book . . . 'All the Dirty Parts' is a shockingly original novel--readers might be reminded of Philip Roth's famously raunchy 'Portnoy’s Complaint' . . . It deserves to be read widely, and not just by adults--it's one of the most realistic depictions of the sex lives of young people to come around in a long time." - Los Angeles Times

"This interesting experiment by Handler may be the most clear-eyed and honest portrayal of the sexuality of adolescent boys in recent memory--it's raw, authentic, fitfully funny, and tragic all at the same time . . . A disarming cautionary tale." - Starred review, Kirkus Reviews

"Handler continues his recent endeavor to boldly straddle the divide between teen and adult books . . . Cole sounds like Holden Caulfield writing a sex blog. Amusing yet genuine, lustful yet sensitive, [All the Dirty Parts] approaches teenage horniness seriously and, in the process, touches on important subjects such as sexism, consent, and sexual identity." - Booklist

"[A] millennial Portnoy's Complaint . . . [Handler] wisely holds nothing back . . . Its unabashedly graphic language will keep this novel off of the young adult shelves, but it is exactly that readership who might benefit most from its surprisingly subtle exploration of sexual ethics." - Library Journal

"All the Dirty Parts is a novel with surprising depth and thoughtfulness . . . Unapologetically raunchy, blunt and often very funny." - BookReporter

"Written in short, tight, and effective bursts, [All the Dirty Parts]is a commentary on today's youth. Cole is a rich character because we see that he has been more or less bred by society to be the sex machine that he is . . . [R]eminiscent of Bret Eston Ellis' Less Than Zero." - New York Journal of Books

"The author of Lemony Snicket's A Series of Unfortunate Events ditches the pen name for a coming-of-age tale about a teenage boy discovering his sexuality. Handler delivers on the title with a blunt, honest--and very explicit--take on a topic that's somehow fallen out of modern storytelling." - Entertainment Tonight, "Fall 2017’s Most Buzzworthy Books"

"[Handler] has created characters that he and his readers can respect, struggling between pursuit of pleasure and the other parts of their lives . . . Handler has smuggled questions of identity, duty and faithfulness into this novel, amid all the heavy breathing and awkward tangling of limbs." - Buffalo News

"An unapologetically raunchy novel with lashings of graphic content. Handler writes in taut paragraphs that feel true to the way teenagers think, and the tale of Cole's irrepressible horniness zips along gratifyingly fast . . . All the Dirty Parts is a profane and lewd novel, but it is also a witty one that confronts subjects such as consent and sexual orientation . . . Cole is good company, and when his sexual experimentation takes him into surprising territory the novel rises to the challenge, turning gracefully into a bildungsroman." - Sunday Times

"[Handler's] latest endeavor truly leaves in all the dirty parts and the result is an engrossing, thought-provoking novel." - Advocate, "10 Great LGBTQ Novels for Young Adults"

"An all-around startling work. The depth of emotion we experience through Cole's eyes is matched perfectly by the sparseness of language . . . The intense reality of All the Dirty Parts comes from its curious ability to draw out the memory of our teen selves--the awkwardness and the ecstasy alike." - Zzyzzyva

"A coming-of-age story with generous dollops of humor and even tenderness." - Santa Cruz Sentinel

"‘All The Dirty Parts’ reads fast and unflinching . . . The book paints an honest portrait of a teenage boy trying to find himself and gain perspective. This slice of Cole's teenage love story isn't all frills and lingering glances. This story is skin and tears and a lost boy trying his best to understand himself." - Oxford Citizen

"Take one sex-crazed teenage boy and take him seriously. Don't make him the butt of an easy joke. Don't make him the star of a humiliation comedy. Let him be an idiot, a jerk, a cad, a hero. Make his desire into a rocket shooting him out of this too small life. Show his loneliness crash-landing him into pieces. It's almost impossible to write tenderly and truthfully about such things. Somehow Handler has done it." - Jenny Offill, author of DEPT. OF SPECULATION

"Sex, desire, love, consent, coercion, sexual identity, porn--Daniel Handler takes it all on in ALL THE DIRTY PARTS. Teenage Cole is simultaneously lovable and troubling, but mostly he is real, and his story not only compelling but a fantastic jumping off point for discussing ethical sexual behavior." - Peggy Orenstein, author of GIRLS & SEX

"A spectacular portrait of teenage male desire. This beautifully concise novel, literally composed of only the dirty parts, had me blushing and laughing and squirming, sometimes all at once. ALL THE DIRTY PARTS is so honest and eloquent about youthful yearning--the pent-up aggression, the confusion, the pure wonder--that it will surely be passed quietly around middle school locker rooms and back-alley libraries everywhere. A joyously lewd yet tender masterpiece." - Isaac Fitzgerald, Buzzfeed Books Editor

"It's been a while since I read something that left me muttering 'Oh my God' every few pages. I finished this slight book in one sitting, and couldn't stop thinking about it afterwards. Yes, there are familiar tropes readily employed and certain passages that made me uneasy, but there is also much to savour, not least Handler's clear-sighted exploration of gender politics and the fluidity of sexual identity. Tender and troubling, authentic and intimate, All the Dirty Parts is a thought-provoking read." - Guardian

Daniel Handler is the author of the novels We Are Pirates, The Basic Eight, Watch Your Mouth, Adverbs, and Why We Broke Up, a 2012 Michael L. Printz Honor Book. He is responsible for many books for children, including the thirteen-volume sequence A Series of Unfortunate Events and the four-book series All the Wrong Questions. He is married to the illustrator Lisa Brown, and lives with her and their son in San Francisco.
Loading...
or
Not Currently Available for Direct Purchase