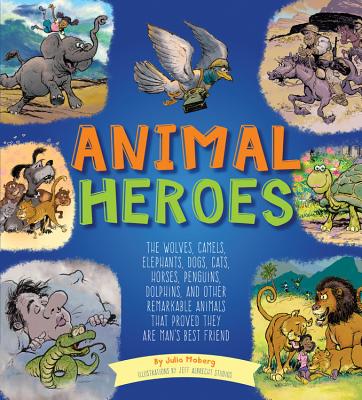 The Wolves, Camels, Elephants, Dogs, Cats, Horses, Penguins, Dolphins, and Other Remarkable Animals That Proved They Are Man's Best Friend

Take a look at the remarkable roles animals undertake every day to help humans and other animals. In wonderfully rhythmic poetry, these stories tell the tales of animals that performed heroic acts, rescued people, saved lives, and even prevented disasters.

From a dog named Delta who saved her owner's life three times before Mount Vesuvius erupted in 79 AD, to LuLu the potbellied pig who called for help when her human got sick, these stories will resonate with readers and animal lovers of all ages. In Animal Heroes you'll discover why General George Washington returned a little dog to the British and probably saved thousands of lives. Ever heard of the heroic baboon named Jackie who acted as a WWI soldier in the frontline trenches of France and Flanders? Incredible stories like this await!

Julia received her BFA and MFA in Dramatic Writing at the Tisch School of the Arts of New York University and was the former editor of the Children's Book of the Month Club.