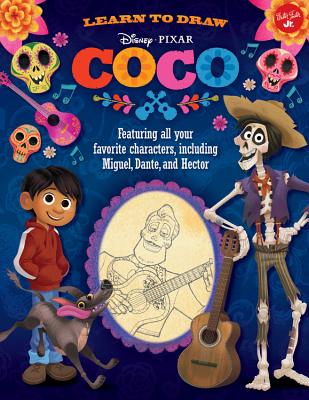 Featuring all your favorite characters, including Miguel, Dante, and Hector (Licensed Learn to Draw)

With Learn to Draw Disney•Pixar Coco, artists-in-training will embark on a thrilling artistic journey with Miguel Rivera to the Land of the Dead! This 64-page book includes drawing projects for 12 characters from the Academy Award-winning movie Disney•Pixar Coco.

Despite the Rivera family’s long-time ban on music, 12-year-old Miguel Rivera dreams of becoming an accomplished musician like his idol, Ernesto de la Cruz. Desperate to prove his talent, Miguel, following a mysterious chain of events, finds himself in the stunning and colorful Land of the Dead. Now you, too, can go on a magical journey to prove your talent, with Learn to Draw Disney•Pixar Coco.

All you'll need to start drawing are a few supplies. And the easy-to-follow instructions in this book will guide you through each step, showing you how each step builds upon the next to create a finished piece of art. You just need to grab a pencil and a piece of paper, and flip to the character you want to draw. You’ll draw the basic shapes shown in step one, and move on to step two, step three, and keep going! The new lines in each step are shown in blue, so you’ll know exactly what to draw. After adding all the details in each step, darken the lines you want to keep and erase the rest. Finally, add color to your drawing with felt-tip markers, colored pencils, watercolors, or acrylic paints.

Plus, learn some fun facts about the Coco characters as you learn to draw them. Included in this book are drawing projects for Miguel Rivera, Miguel in face paint with his guitar, Abuelita, Coco, Dante the Xoloitzcuintli, Tio Oscar and Tio Felipe, Hector, Mama Imelda, Tia Rosita, Tia Victoria, Pepita the alebrije, and Ernesto de la Cruz. Brief character descriptions and art instruction from professional Disney•Pixar animators round out this exciting artistic adventure.

So grab your drawing pencils and take an artistic journey to the Land of the Dead with Learn to Draw Disney•Pixar Coco!