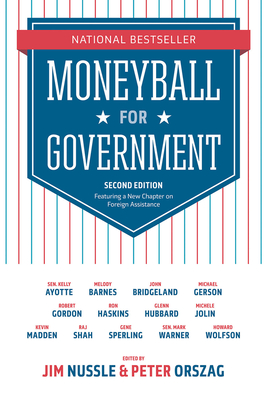 Data and evidence don't lie – but for too long, our policy makers haven't paid them nearly enough attention.

In 2014, an all-star team of leaders and thinkers from across the political spectrum came together to propose an exciting new vision for the country – one where policy makers base decisions not on politics or expedience, but on the hard evidence of what really works. The first edition of Moneyball for Government did more than just spark conversations; it spurred meaningful action. Now, Michael Gerson and Rajiv Shah join the second edition of the book, as they explain a variety of ways to apply this revolution of rigor to foreign assistance. For anyone who believes that government must do better for America's children and their families, Moneyball for Government is a home run.

Jim Nussle is founder and president of the Nussle Group. From 2007 to 2009, he served as director of the Office of Management and Budget in the White House. For the sixteen years prior, he represented southeastern Iowa in the United States Congress, where he served as chairman of the Budget Committee.

Peter Orszag is a vice chairman of corporate investment banking and chairman of the Financial Strategy and Solutions Group at Citigroup. From 2009 to 2010, he served as director of the Office of Management and Budget in the White House, and from 2007 to 2008 he was the director of the Congressional Budget Office (CBO).