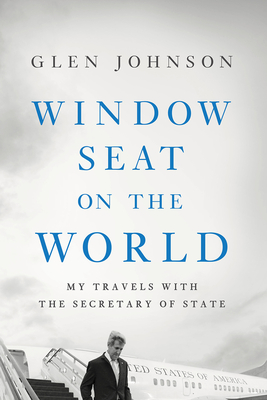 Window Seat on the World

Unless they’ve lost a passport abroad, most Americans have little appreciation for the reach and scope of the US Department of State or the perils faced by its employees. Reporter Glen Johnson had been covering politics for the Boston Globe when he received a job offer that would embed him in this world of protocols, planes, and global peacekeeping. His new boss would be Secretary of State John Kerry, set to become the most prominent diplomat on the world stage. Johnson sensed it was a meeting of man and moment. For four years, he accompanied Kerry as he became the most-traveled Secretary of State in history. The former journalist kept notes while Kerry worked out a power-sharing agreement in Afghanistan, negotiated with the Israelis, convinced Iran to get rid of its nuclear weapons program, developed a counter-ISIS coalition, and brokered climate change agreements, including the 2015 Paris Agreement. Kerry also confronted two lingering challenges: how to cooperate with an assertive China and a Russia that sidestepped its own wrongdoing but felt aggrieved and justified to interfere in the 2016 presidential election. In his goal to create the best and most complete photo archive of any Secretary of State, Johnson lobbied the State Department for a decent camera and shot more than 100,000 photographs everywhere Kerry went—from the office of Pope Francis to center ice for a puck drop at Madison Square Garden, from the Kremlin and No. 10 Downing Street to a helicopter flying over Antarctica. Window Seat on the World is an all-access look at life inside the nation’s first cabinet agency: the complexity of State Department protocols, the grueling schedules, the delicacy of engagement with world leaders and foreign cultures, and the dedication of a longtime public servant and his team to the practice of diplomacy.

Praise For Window Seat on the World…

“Window Seat on the World is a whirlwind tour of four consequential years of American diplomacy, written with the unique insights of a veteran journalist who had a front-row seat... An invaluable book for anyone who cares about America’s role in the world and the dedicated public servants who carry our mission abroad.” —Andrea Mitchell, NBC News Chief Foreign Affairs Correspondent

“Glen Johnson’s Window Seat on the World gives us a rare, inside look at diplomacy as it is practiced at the highest level. An important and revealing read.” —Ambassador (ret.) Nicholas Burns, Professor, Harvard University; former Under Secretary of State; former State Department spokesman

"Writing with the skill of a former news reporter and the access granted a staff member, Johnson provides fresh perspective on John Kerry’s remarkable career of public service, including descriptions of his patience, creativity, and the special skills he brought to a job perfectly suited to his background." —Ambassador (ret.) Alan Solomont, Dean, Tisch College of Public Service, Tufts University; former finance chairman, Democratic National Committee

"A firsthand account showing that high stakes politics are ultimately about people; the ones making decisions and those who are impacted … including me!” —Jason Rezaian, Washington Post columnist and author, Prisoner: My 544 Days in an Iranian Prison

Glen Johnson covered five presidential elections over three decades reporting for The Boston Globe, Associated Press, a string of local newspapers, and the historic City News Bureau of Chicago. He served as US deputy assistant secretary of State for strategic communications from 2013 to 2017 under an appointment by President Barack Obama, and took over 100,000 photos of Secretary Kerry during their international travels. Johnson proudly graduated from Lawrence University in Appleton, Wisconsin. He now lives outside Boston.

Glen Johnson covered five presidential elections over three decades reporting for the Boston Globe, Associated Press, a string of local newspapers, and the historic City News Bureau of Chicago. He served as US Deputy Assistant Secretary of State for Strategic Communications from 2013 to 2017 under an appointment by President Barack Obama, and took over 100,000 photos of Secretary Kerry during their international travels. He now is a writer, consultant, and teacher living outside Boston. Johnson proudly graduated from Lawrence University in Appleton, Wisconsin.
Loading...
or support indie stores by buying on