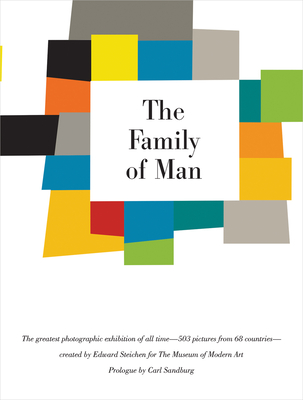 The Family of Man

Hailed as the most successful exhibition of photography ever assembled, The Family of Man opened at The Museum of Modern Art in January 1955. It was groundbreaking in its scope--503 images by 273 photographers originating in 69 countries--as well as in the numbers of people who experienced it on its tour through 88 venues in 37 countries. As the permanent embodiment of Edward Steichen's monumental exhibition, this publication reproduces all of the 503 images that Steichen described as "a mirror of the essential oneness of mankind throughout the world. Photographs made in all parts of the world, of the gamut of life from birth to death." To celebrate the 60th anniversary of this classic and inspiring work, MoMA is releasing this handsome hardcover edition.

Edward Steichen was an American photographer, painter, designer, and curator. Born in 1879, Steichen emigrated from Luxembourg to the United States with his family in 1881. Steichen began as a self-taught photographer and gained recognition after his work was discovered by photographers Clarence H. White and Alfred Stieglitz. Steichen's work was often featured in Stieglitz's influential magazine Camera Work. In 1947, Steichen became the director of MoMA's photography department. Undoubtedly his most influential and popular exhibition as director was the 1955 show The Family of Man. Presenting what Steichen referred to as a "collective portrait" of humanity, the exhibition featured 503 photographs from 68 countries, 273 of which were taken by amateur photographers.Carl Sandburg was an American writer, poet, and editor. He was the recipient of three Pulitzer Prizes: one for a biography of Abraham Lincoln and two additional for his poetry. Hailed as a poet whose work connected to a plurality of experiences, Sandburg provided a prologue well suited for Steichen's universalizing photo narrative.
Loading...
or
Not Currently Available for Direct Purchase