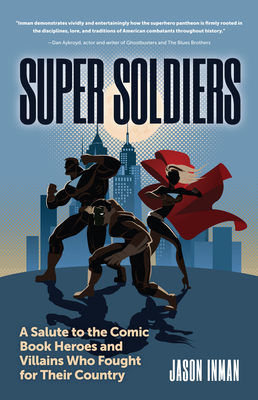 Military heroes in comic books. Comic book superheroes have been influenced by the true heroes of our armed forces for decades. They frequently recreate the actions of presidents, military leaders, and soldiers. From Captain America punching Hitler in the jaw on his very first cover, to The Punisher surviving the battle of Firebase Valley Forge, there are countless instances when the military has crossed over to the pages of comic books.

Soldiers and superheroes. A veteran of Operation Iraqi Freedom, author Jason Inman re-discovered his childhood love of comic books during long days at the Tallil Air Base in southern Iraq. He couldn't help but ask why so many comic books are filled with service members. Maybe it's their loyalty to everyday citizens and the never-ending quest for justice. The men and women who lace up their books and sacrifice their lives know that battle can change a person. What kinds of soldiers were these fictional characters, and how were they changed by war?

Perfect military enlistment gift or gift for veterans. Super Soldiers: A Salute to the Comic Book Heroes and Villains Who Fought for Their Country looks at the intersection between war and pop culture to understand these questions and more. Each chapter revisits military comic book characters and compares them to personal stories from Inman's military career; describing superhero soldiers from DC comics and Marvel comics, including lesser-known characters lost to time. Super Soldiers is a perfect gift for soldiers and fans of military science fiction or non-fiction heroes, and everyone who wants to know the stories behind their favorite comic books.

You'll love Super Soldiers if you enjoyed DC Comics Encyclopedia All-New Edition, The Secret History of Wonder Woman, The League of Regrettable Superheroes, The Legion of Regrettable Supervillains or non-fiction books such as Alone at Dawn, Saving Bravo, or Across The Fence.