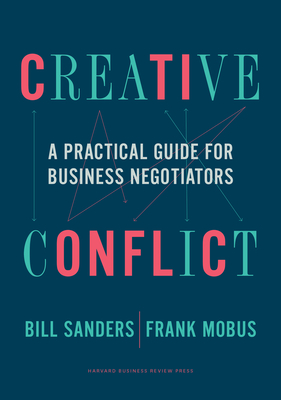 A Practical Guide for Business Negotiators

Negotiation is stuck. It's time for something new.

Almost everything is negotiable. Almost every interaction is a negotiation. And in no field is this clearer than in business, where every day we work with others to get things done. But when we have real differences, is win-win always possible? Or must every negotiation be a zero-sum battle, with a winner and a loser?

Over the last half century, two opposing philosophies have ruled the field of negotiation: the win-lose, tooth-and-nail approach of training guru Chester Karrass; and the win-win, principled creed of Getting to Yes, developed by Roger Fisher and William Ury. But neither approach fully meets the challenge of today's volatile, disruptive, ultracompetitive business environment, where strategic problem-solving is of critical importance.

In Creative Conflict, negotiation experts Bill Sanders and Frank Mobus provide something new. They use a dynamic, dialectical approach to show how negotiations are driven by competition and cooperation at the same time. Counterintuitively, they reveal that conflict lies at the heart of more profitable agreements. They believe that when we tiptoe around conflict, we negotiate in a half-hearted way that limits our results. By contrast, creative negotiators probe and push until they hit a wall of disagreement, and then they figure out how to get past it. The authors construct a clear and useful framework based on three distinct negotiating contexts: Bargaining, Creative Dealmaking, and Relationship Building. They instruct readers on how to skillfully pursue their fair share while simultaneously seeking ways to expand a deal's scope and value for both sides.

Bill Sanders is CEO of Mobus Creative Negotiating, a firm providing public seminars, private in-house corporate training, coaching, and consulting to Fortune 500 companies. Prior to Mobus, Sanders played a central role at Karrass, the twentieth-century gold standard for negotiation training. He received his doctorate in physical chemistry from the Pennsylvania State University.Frank Mobus was founder of Mobus Creative Negotiating. Long recognized as one of the world's top authorities on business negotiating, he spearheaded the training seminar program at Karrass before founding his own firm, where he created the most advanced negotiating programs in the field. Mobus graduated from the University of California, Irvine, and earned his master's degree from New York University.You can find more about the authors at: Bill Sanders: linkedin.com/in/wrsandersFrank Mobus: mobusinc.com/frank-mobus-and-the-mobus-creative-negotiating
Loading...
or support indie stores by buying on