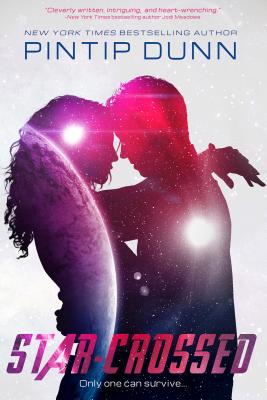 “An unusual focus on food only improves this intriguing coming-of-age story.” - Kirkus Reviews

Stranded on a planet that lacks food, Vela makes the ultimate sacrifice and becomes an Aegis for her people. Accepting a genetic modification that takes sixty years off her life, she can feed her colony via nutrition pills. But her best friend is still getting worse. And she's not the only one.

Now the king is dying, too.

When the boy she's had a crush on since childhood volunteers to give his life for her father's, Vela realizes her people need more than pills to survive. As tensions rise between Aegis and colonists, secrets and sabotage begin to threaten the future of the colony itself.

Unless Vela is brave enough to save them all…

"With a prose as incandescent as a nebula, and a romance that blazes like the sun, Star-Crossed utterly consumed me from the very first page. Readers will savor this riveting, emotional tale of hope and supreme sacrifice." —Darcy Woods, award-winning author of Summer of Supernovas

"Pintip Dunn’s creative worldbuilding brings to life a delicious tale full of depth and complexity with a bold heroine filled with love, loyalty, and courage. Star-Crossed will transport readers to another universe and leave them hungry for more!" —Brenda Drake, NYT bestselling author of the Library Jumpers series

"Pintip Dunn has crafted one multi-course meal of a story: a fascinating premise to whet the appetite, an entree of utterly compelling world-building seasoned with literary prose, and a forbidden romance that has all the decadence of the richest dessert. It’s well worth savoring!" —Jen Malone, author of Wanderlost and Changes in Latitudes

When her first-grade teacher asked her what she wanted to be when she grew up, Pintip replied, "An author." Although she has pursued other interests over the years, this dream has never wavered.

Pintip graduated from Harvard University and received her J.D. at Yale Law School. She published an article in the YALE LAW JOURNAL, entitled, "How Judges Overrule: Speech Act Theory and the Doctrine of Stare Decisis," and received the Barry S. Kaplan Prize for best paper in Law and Literature.

Pintip is a 2012 Golden Heart® finalist and a 2014 double-finalist. She lives with her husband and children in Maryland.