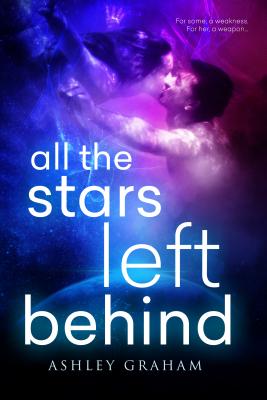 All the Stars Left Behind

Relocating to Arctic Norway would put a freeze on anyone’s social life. For Leda Lindgren, with her crutches and a chip on her shoulder the size of her former Manhattan home, the frozen tundra is just as boring as it sounds. Until she meets her uncle’s gorgeous employee.

Unfortunately, no matter how smoking hot the guy is, Roar comes with secrets as unnerving as his moving tattoos. And Leda doesn’t trust him.

Roar shouldn’t be drawn to the moody human girl with eyes that leave him weak in the knees. But when Leda gets shot by one of his enemies and survives, Roar finally understands why he’s drawn to her: Leda is exactly what he was sent to Earth to find. A weapon of immense power capable of saving his planet.

She just doesn’t know it yet.

Ashley Graham grew up in a small town in Ontario, Canada. For her thirteenth birthday, her grandparents took her across the Atlantic to the United Kingdom, sparking a love of all things European. Since then, she has lived in the UK and Norway, and now calls Los Angeles home.
She began writing to combine her love of history, aliens, and science fiction with kick-butt heroines who don’t need a white knight. Her obsessions include vegan cooking, books, tea, sandals, turquoise jewelry, nail polish, and online shopping.