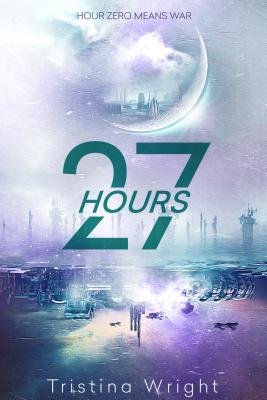 Rumor Mora fears two things: hellhounds too strong for him to kill, and failure. Jude Welton has two dreams: for humans to stop killing monsters, and for his strange abilities to vanish.

Nyx Llorca keeps two secrets: the moon speaks to her, and she's in love with her best friend, Dahlia. Braeden Tennant wants two things: to get out from his mother's shadow, and to unlearn his colony’s darkest secret.

To save everyone they love, they'll both have to commit treason.

During one twenty-seven-hour night, these four runaways must stop the war between the colonies and the monsters from becoming a war of extinction, or the things they fear most will be all that's left.

"Tristina Wright presents a world that will at once thrill and horrify readers and make the most vulnerable of us feel unambiguously welcome and valid." –Meredith Russo, author of critically acclaimed If I Was Your Girl

"Tristina Wright has masterfully crafted a world that's as fascinating as it is dangerous. From the terrifying monsters to are refreshingly inclusive cast of characters to the bonds of friendship at the heart of this story, it has everything you could possibly want. If you're looking for your next favorite space saga, look no further." –Tara Sim,author of Timekeeper

"Vibrant world building, heart-pounding action, and a cast of characters so real and vulnerable they'll steal your heart make 27 HOURS an unforgettable read. This is the queer science-fantasy epic you've been waiting for." –Claire Legrand, acclaimed author of Winterspell

"An exhilarating ride from the very first page, filled with fiercely original monsters and a cast as enthralling as they are diverse 27 HOURS is everything readers could want from a space epic. And more." –A.R. Kahler, author of The Immortal Circus series

"Tristina Wright's 27 HOURS combines science fiction and fantasy against the backdrop of a world so vivid you can smell it. A whirlwind of action and romance surround its diverse cast as they fight against a ticking clock to survive and save their home from destruction. Readers who loved Laini Taylor's Daughter of Smoke and Bone or Brian K.Vaughn's Saga will be on the edge of their seats at the end of Wright's first entry in The Nightside Saga." –Alexandra Duncan, award-winning author of Salvage

"A big, badass space epic with a truly inclusive cast of teens who have strong friendships, high-stakes love lives,and a central place in the adventures of the cosmos. Wright carves out a gorgeous, complex future world and brings it to life, hour by action-packed hour." –Amy Rose Capetta, author of Echo After Echo

Tristina Wright is a blue-haired bisexual with anxiety and opinions. She’s also possibly a mermaid, but no one can get confirmation. She fell in love with science fiction and fantasy at a young age and frequently got caught writing in class instead of paying attention. She writes stories about people who are heroes and monsters and sometimes both. She enjoys worlds with monsters and kissing and monsters kissing. She married a nerd who can build her new computers and make the sun shine with his smile. Most days, she can be found drinking coffee from her favorite chipped mug and making up more stories for her wombfruit, who keep life exciting and unpredictable.

Still trying to figure out the mermaid thing.