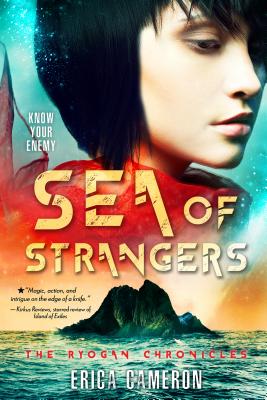 Sea of Strangers (The Ryogan Chronicles #2)

The only way for Khya to get her brother back alive is to kill Varan—the immortal ruler who can’t be killed. But not even Varan knew what he was doing when he perverted magic and humanity to become immortal.

Khya’s leading her group of friends and rebels into the mountains that hold Varan’s secrets, but if risking all their lives is going to be worth it, she has to give up everything else—breaking the spell that holds her brother captive and jeopardizing her deepening relationship with Tessen, the boy who has been by turns her rival and refuge since her brother disappeared. Immortality itself might be her only answer, but if that’s where Khya has to go, she can’t ask Tessen or her friends to follow.


Praise For Sea of Strangers (The Ryogan Chronicles #2)…

"This rare gem of a book has a lot to offer readers, including magic, action, and intrigue on the edge of a knife." — Kirkus Reviews, starred review of Island of Exiles

"Harrowing and heartfelt…Crackles with harsh magic and gripping suspense." — A.R. Kahler, author of The Immortal Circus series, on Island of Exiles

After a lifelong obsession with books, Erica Cameron spent her college years getting credit for reading and learning how to make stories of her own. Erica graduated with a double major in psychology and creative writing from Florida State University. She’s worked as a dance instructor, research assistant, pointe shoe fitter, pizza delivery girl, editorial assistant at a yachting magazine, bookseller, and English literature teacher at a residential rehabilitation center for teens. Now, she’s the author of several series for young adults including The Ryogan Chronicles, the Assassins duology, and the upcoming Pax Novis trilogy. Additionally, Erica works for Barnes & Noble and is an advocate for asexuality and emotional abuse awareness. She currently lives in South Florida. You can learn more about Erica and her books by visiting ByEricaCameron.com.
or
Not Currently Available for Direct Purchase