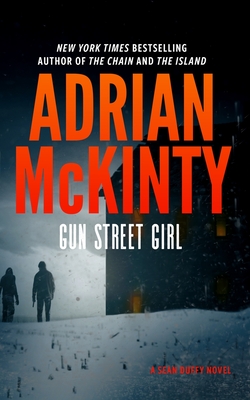 Shortlisted for the Anthony, Ned Kelly, and Edgar® Awards! Belfast, 1985, amidst the “Troubles”: Detective Sean Duffy, a Catholic cop in the Protestant RUC (Royal Ulster Constabulary), struggles with burn-out as he investigates a brutal double murder and suicide. Did Michael Kelly really shoot his parents at point blank and then jump off a nearby cliff? A suicide note points to this conclusion, but Duffy suspects even more sinister circumstances. He soon discovers that Kelly was present at a decadent Oxford party where a cabinet minister’s daughter died of a heroin overdose. This may or may not have something to do with Kelly’s subsequent death. New evidence leads elsewhere: gun runners, arms dealers, the British government, and a rogue American agent with a fake identity. Duffy thinks he’s getting somewhere when agents from MI5 show up at his doorstep and try to recruit him, thus taking him off the investigation. Duffy is in it up to his neck, doggedly pursuing a case that may finally prove his undoing.

Named one of the Best Books of 2015 by the Boston Globe!

“When it comes to Northern Irish crime fiction, Adrian McKinty forged the path the rest of us follow. The Sean Duffy series is the culmination of a career spent examining our darkest moments, and McKinty is the only crime writer who can do justice to our singular history.”

“Gun Street Girl is great; I'm so glad that Adrian McKinty has given readers another novel starring Belfast cop Sean Duffy, whose earlier exploits were described in the terrific Troubles trilogy. Don't miss any of the four….”

“Series fans will appreciate the further insight into the fallout from tragic cases, department politics, and war. As usual, there’s plenty of entertaining territorial battling between the dizzying array of law-enforcement agencies acting in Belfast, and Duffy’s investigative skills seem somehow sharpened by his lost hope.”
—BOOKLIST STARRED REVIEW

“The latest Sean Duffy mystery brings back the cop who stars in these dark, intriguing, but still somehow witty novels.  His latest is a thrilling, thoroughly fantastic murder mystery with countless twists and turns that take readers to the darkest parts of Belfast and some huge cover-ups within the Irish and British governments.”
—RT BOOK REVIEWS (FOUR STARS – Compelling)

“Mixes a mordant wit and casual, unpredictable violence that vividly portrays a turbulent time…. McKinty is in full command of language, plot, and setting in a terrifying period of history that sometimes seems forgotten. Fans of gritty Northern Irish crime writers such as Stuart Neville, Declan Hughes, and Brian McGilloway will enjoy this talented author.”  —LIBRARY JOURNAL STARRED REVIEW

“I had been saddened at the thought that this series had ended. Imagine my delight; McKinty has now written a fourth book…. Read all four. They are phenomenal.”
—THE SUN HERALD, Mississippi

"McKinty's novels are...shot through with a smart, crackling humor that manages to be both dark and witty.... Each book is a solid standalone, but it's even better to ride the entire trilogy roller coaster."
—BOSTON GLOBE

“A dark-humored shamus in the Phillip Marlowe tradition, [Sean Duffy] is . . . buoyed through the murderous chaos by his love of classical, punk, and new-wave music, the Greek philosopher Epicurus, and frothy pints of Guinness.”
—WALL STREET JOURNAL

"I Hear the Sirens in the Street blew my bloody doors off!"
—IAN RANKIN, author of the Inspector Rebus novels

"Sean Duffy is a compelling detective, the evocation of the period is breathtaking and the atmosphere authentically menacing."
—BRIAN McGILLOWAY, New York Times-bestselling author

Adrian McKinty is the author of eighteen novels, including the acclaimed Detective Sean Duffy novels. Rain Dogs won the 2017 Edgar® Award for Best Paperback Original. Gun Street Girl was shortlisted for the Anthony, Ned Kelly, and Edgar® Awards. The Cold Cold Ground won the Spinetingler Award. I Hear the Sirens in the Street won the Barry Award and was shortlisted for the Ned Kelly Award. In the Morning I'll Be Gone won the Ned Kelly Award and was selected by the American Library Association as one of the top-10 crime fiction novels of 2014. McKinty is also the author of the standalone historical The Sun Is God. Born and raised in Carrickfergus, Northern Ireland, McKinty was called "the best of the new generation of Irish crime novelists" in the Glasgow Herald.
or
Not Currently Available for Direct Purchase