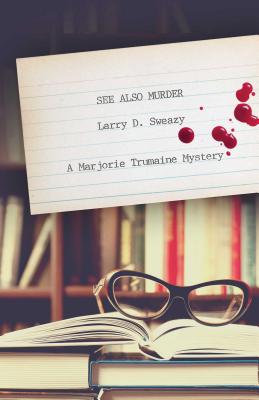 1964—Life on the North Dakota farm hasn’t always been easy for Marjorie Trumaine. She has begun working as a professional indexer to help with the bills—which have only gotten worse since the accident that left her husband, Hank, blind and paralyzed. When her nearest neighbors are murdered in their beds, though, Marjorie suddenly has to deal with new and terrifying problems. Sheriff Hilo Jenkins brings her a strange amulet, found clutched in the hand of her murdered neighbor, and asks her to quietly find out what it is. Marjorie uses all the skills she has developed as an indexer to research the amulet and look into the murders, but as she closes in on the killer, and people around her continue to die, she realizes that the murderer is also closing in on her.

Larry D. Sweazy is the author of Vengeance at Sundown, The Gila Wars, The Coyote Tracker, The Devil's Bones, The Cougar's Prey, The Badger's Revenge, The Scorpion Trail, and The Rattlesnake Season. He won the WWA Spur award for Best Short Fiction in 2005 and for Best Paperback Original in 2013, and the 2011 and 2012 Will Rogers Medallion Award for Western Fiction for the Josiah Wolfe series. He was nominated for a Derringer award in 2007, and was a finalist in the Best Books of Indiana literary competition in 2010, and won in 2011 for The Scorpion Trail. He has published over sixty nonfiction articles and short stories, which have appeared in Ellery Queen's Mystery Magazine; The Adventure of the Missing Detective: And 25 of the Year's Finest Crime and Mystery Stories!; Boys' Life; Hardboiled; Amazon Shorts, and several other publications and anthologies. He is member of ITW (International Thriller Writers), WWA (Western Writers of America), and WF (Western Fictioneers).

—KAT MARTIN, New York Times-bestselling author of Against the Wind

“See Also Murder is a riveting and expertly crafted story about the toll a series of murders takes on a salt-of-the-earth North Dakota farming community in 1964. The book is populated by a rich cast of three-dimensional characters, each of whom is affected not only by the crimes that take place but also by the harsh and relentless wear and tear of the weather and the lingering aftereffects of the Second World War. And who better to save the day than Sweazy's protagonist, Marjorie Trumaine, a gritty, thoughtful, and determined freelance book indexer who is just as comfortable using her considerable mind as she is the .22 she dutifully carries when danger lurks? I couldn't put this book down. It's one of the best mysteries I've read in a long time, and I look forward to more in this engaging and powerful series.”

—DAVID BELL, award-winning and bestselling author of Somebody I Used to Know

“For a mystery to work, we must be engaged in time, place, and people. See Also Murder does this in spades. Sweazy has a created a new, relatable, and endearing  hero in Marjorie Trumaine, the indexer who becomes a detective, and by writing in her voice, a voice of the prairie, demonstrates again that he is as fine a genre writer as exists.  But Sweazy goes further. By taking us to the isolated plains of the Midwest during the 1960s, he has found his own perfect backdrop for murder. Like Raymond Chandler’s Los Angeles or Elmore Leonard’s Detroit, Larry Sweazy can claim the Dakotas as his own, with every approaching lone car a threat, and every silhouette on the horizon a possible killer. In See Also Murder, [he] shows us his landscape brilliantly, and proves that miles of open nothing can be as dark and dangerous as a rain-soaked back alley.”

“See Also Murder begins as a deceptively quiet work but is quick to snare the unsuspecting reader with powerful writing and a precise sense of place. Confident, stark descriptions whistle through these haunting pages, borne on unrelenting prairie winds that strip deceptions and leave little hidden. Here is that rare combination of artistic use of language and crackerjack storytelling in a mystery filled with moments of bold, sudden revelation. Equally impressive are reflective passages of admiration for everyday beauty appreciated by unlikely heroic protagonist, farm wife, and indexer Marjorie Trumaine, even in the midst of unexpected brutal circumstances. Sweazy’s powerful mystery will guide the reader wide-eyed into the wee hours, savoring the task of picking at the tight weave of crime within. The only disappointment comes in waiting for a second book in what is sure to be a long-lived series.”