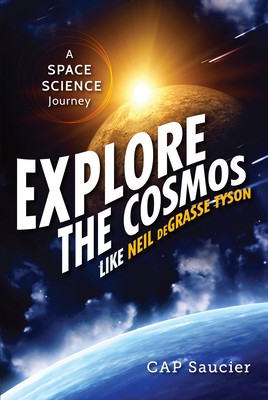 This introduction to space science for children uses the story of Neil deGrasse Tyson's life and career to frame the journey.

Catch the thrill of the cosmos and space science through the life of Neil deGrasse Tyson—the popular astrophysicist, science communicator, and host of FOX-TV’s Cosmos: A Spacetime Odyssey. In language neither too simple nor overly technical, author CAP Saucier interweaves up-to-date information about the universe and the science of astrophysics with a biographical portrait of the famous astrophysicist. Quotes from Tyson appear throughout each chapter, personalizing the science.

Illustrated with striking images from the Hubble Space Telescope, the story of one man's successful life in space science may inspire kids to follow a similar path. As Tyson makes clear, there is still much to do for future space scientists: diverting asteroids, unraveling the mystery of dark matter, finding life elsewhere in the universe, and more!

Praise For Explore the Cosmos like Neil deGrasse Tyson: A Space Science Journey…

“From the big bang to the formation of planets, this book delightfully weaves together the story of modern astronomy with the life story of how a young African American inner-city kid grew up to be one of the most recognized and influential personalities in all of science.”

“Neil deGrasse Tyson is one of those rare scientists who is a household name—and for good reason. His larger-than-life personality and passion for unraveling the mysteries of the cosmos compel us to marvel at the world around us. Saucier trains her lens on ‘the universe within’ the great astrophysicist and popularizer, and the result is as fun as it is educational. From Tyson’s boyhood observations of the night sky from the rooftop of his family’s New York City apartment to his research into how galaxies form, Saucier charts the meteoric rise of a man who reached for the stars—and caught them.”


Praise for The Lucy Man: The Scientist Who Found the Most Famous Fossil Ever!

"Engaging and well-illustrated... it will hopefully inspire young readers to become evolutionary biologists and to go out and make their own important discoveries." -Quarterly Review of Biology

"This book should give anyone, expert or beginner, a better appreciation of [Johanson] and his work. It would make a fine gift to a young aspiring fossil-hunter and a worthy addition to any school library."
-National Center for Science Education Reports

"Any youngster showing an interest in such things will be immersed for hours in this book."
-Bookviews

"This handy little book delves into the basic science of human evolution... Saucier breaks down a difficult subject into an easily digestible format... We expect to see more from this author in the near future."
-Sacramento Book Review

"This book would be a wonderful supplement for a child who has had both theories removed from the school curriculum. Readers will feel like they were part of that fateful dig and will be able to sense the excitement felt when Lucy was found."
-Portland Book Review

CAP Saucier is the author of The Lucy Man: The Scientist Who Found the Most Famous Fossil Ever! She is also a freelance artist, illustrator, and writer.
Loading...
or support indie stores by buying on