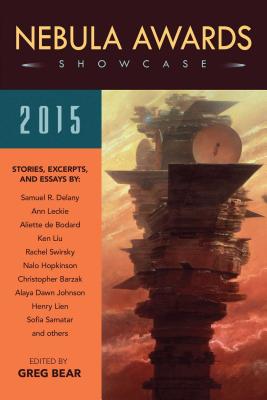 The Nebula Awards Showcase volumes have been published annually since 1966, reprinting the winning and nominated stories of the Nebula Awards, voted on by the members of the Science Fiction and Fantasy Writers of America (SFWA). The editor of this year's volume, selected by SFWA’s anthology Committee (chaired by Mike Resnick), is American science fiction and fantasy writer Greg Bear, author of over thirty novels, including the Nebula Award-winning Darwin’s Radio and Moving Mars. This anthology includes the winners of the Andre Norton, Damon Knight Memorial Grand Master, Rhysling, and Dwarf Stars Awards, as well as the Nebula Award winners, and features Ann Leckie, Nalo Hopkinson, Rachel Swirsky, Aliette de Bodard, and Vylar Kaftan, with additional articles and poems by authors such as Robin Wayne Bailey, Samuel R. Delany, Terry A. Garey, Deborah P Kolodji, and Andrew Robert Sutton.

“The stories reflect a wistful, longing, poignant view of what it means to be human…. This is a fantastic selection of stories that represent the best of the genre by writers both new and old--each a master of the craft.”
- Shelf Awareness for Readers, STARRED REVIEW

"There is not a story in the bunch that is not engaging to the reader....This is an excellent book for lovers of science fiction." - SeattlePI.com

"Featuring writing of the highest quality in the genre, this compilation is certain to appeal to those demanding imaginative fiction." - Booklist

Greg Bear is the author of over thirty novels, including the Nebula Award-winning Darwin’s Radio and Moving Mars. Other books include Hull Zero Three, City at the End of Time, Mariposa, Halo: Silentium, Halo: Primordium, and Halo: Cryptum. He’s the father of two young writers, Erik and Alexandra, and his wife, Astrid Anderson Bear, has sold her first short story to San Diego Noir, in collaboration with Diane Clark.
Loading...
or
Not Currently Available for Direct Purchase