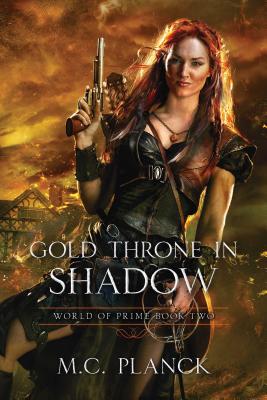 The continuing adventures of Christopher Sinclair, mechanical engineer turned priest of war. Christopher, raised from the dead and promoted to a moderate rank, takes command of the army regiment he trained and equipped. Sent south to an allegedly easy posting, he finds himself in the way of several thousand rabid dog-men. Guns and fortifications turn back the horde, but Christopher has other problems that cannot be solved with mere firepower: a wicked assassin; hostile clergymen; dubious allies including a bard, Lalania, with a connection to a mysterious group of scholars; and worst of all his own impolitic tongue. But all of these pale into mere distractions once he discovers the true enemy: an invisible, mind-eating horror who plays the kingdom like a puppet-master’s stage. Lalania claims she can help--but will it be enough?

Praise For Gold Throne in Shadow (World of Prime #2)…

PRAISE FOR SWORD OF THE BRIGHT LADY:

"Sword of the Bright Lady is an exciting new take on the modern-man-meets-magic conflict--it's a how-to guide for surviving in a world of gods and monsters." --DAVE GROSS, author of Prince of Wolves

"Readers looking for a new twist on an old story will be interested in this tale of modern idealism set in a gritty medieval world." --PUBLISHERS WEEKLY

M.C. Planck is the author of Sword of the Bright Lady (World of Prime: Book 1) and The Kassa Gambit. After a nearly-transient childhood, he hitchhiked across the country and ran out of money in Arizona. So he stayed there for thirty years, raising dogs, getting a degree in philosophy, and founding a scientific instrument company. Having read virtually everything by the old Masters of SF&F, he decided he was ready to write. A decade later, with a little help from the Critters online critique group, he was actually ready. He was relieved to find that writing novels is easier than writing software, as a single punctuation error won't cause your audience to explode and die. When he ran out of dogs, he moved to Australia to raise his daughter with kangaroos.
Loading...
or support indie stores by buying on