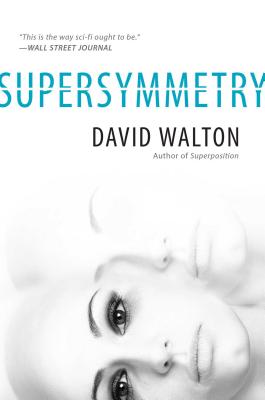 Ryan Oronzi is a paranoid, neurotic, and brilliant physicist who has developed a quantum military technology that could make soldiers nearly invincible in the field. The technology, however, gives power to the quantum creature known as the varcolac, which slowly begins to manipulate Dr. Oronzi and take over his mind. Oronzi eventually becomes the unwilling pawn of the varcolac in its bid to control the world. The creature immediately starts attacking those responsible for defeating it fifteen years earlier, including Sandra and Alex Kelley—the two versions of Alessandra Kelley who are still living as separate people. The two young women must fight the varcolac, despite the fact that defeating it may mean resolving once again into a single person.

"Thrills and spills and sheer excitement on full-throttle overdrive."

“This sequel to Superposition is just as excellent as the first.  Fast-paced, mind-bending, super-scientific yet fully accessible and very understandable to the layman reader.  Full of new possibilities and probabilities, Supersymmetry gives readers a peek into what the future may hold and the cost that comes with it.  This is a science fiction novel full of humanity and all its inherent beauty and ugliness.”

—RT BOOK REVIEWS (Four and a half stars, FANTASTIC - KEEPER)

"David Walton is one of our very best writers of science-fiction thrillers."

“[An] engrossing and illuminating sci-fi thriller…. This is the way sci-fi ought to be.”

“An expanding universe of delight.”

“Gripping, suspenseful and original, this is a page-turning novel that readers are sure to devour. Fantastic”

“An utterly addictive murder mystery with a fantastic twist…. A cleverly thought-out bit of sci-fi fun.”

“A truly fascinating approach to thriller writing.… The story’s strength lies in its ingenious structure that neatly unfolds against an impressive backdrop of science.”

David Walton is the author of Superposition, Quintessence, and the Philip K. Dick award-winning novel Terminal Mind. He lives near Philadelphia with his wife, seven children, and three hamsters. By day, he works on classified defense technology, which not even the hamsters are allowed to know about. Since he doesn't actually have time to write, he trained the hamsters to do it for him, with a combination of Morse clicks on their drinking bottle and cleverly-arranged pellets. David's fiction explores themes that skirt the edges of science and religion, such as human origins, the nature of truth, the certainty of death, and the nature of the soul.
Loading...
or
Not Currently Available for Direct Purchase