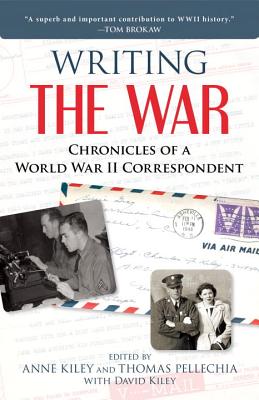 As expansive as it is personal, this chronicle of World War II is a firsthand account by a journalist and the woman he would marry of the dramatic events that engulfed the world in the middle of the twentieth century. The correspondence between Charles Kiley and Billee Gray also tells the poignant tale of two young people in love but forced apart by the circumstances of war. Edited by Charles and Billee's daughter, son, and son-in-law, this never-before-published compilation of letters is a striking example of the heroic, call-to-duty spirit that characterized "the greatest generation."

Charles was a soldier-journalist for the U.S. Army's Stars and Stripes newspaper and reported on the war from London, Normandy, Paris, Reims, Belgium, and Germany. As the sole reporter allowed direct access to Eisenhower's staff, he was the only reporter on the scene when the German high command was negotiating its unconditional surrender on May 7, 1945. Among his army newspaper friends and colleagues was Andy Rooney, later CBS correspondent and 60 Minutes commentator. Billee, like many young women of her time, witnessed the war years from the home front and filled vital civilian roles--defense-industry plant worker, Red Cross volunteer, war bonds salesgirl, and civil defense plane-spotter--and wrote about it all in her letters to Charles.

Peppered with fascinating details about soldiers' and civilians' lives, and including Stars and Stripes articles and personal photographs of the era, Writing the War is both important history and a tribute to two remarkable people as well as their extraordinary generation.

Praise For Writing the War: Chronicles of a World War II Correspondent…

“Writing the War is a superb and important contribution to WWII history. Charles Kiley was a crack reporter on the biggest story of the twentieth century.”

“Charlie Kiley became one of my father’s best friends while they covered the war for Stars & Stripes. He used to come home and say, ‘I had lunch with Kiley today.’ These letters are a fascinating chronicle of love and separation, war and death, as Charlie and Billee Kiley were swept along with history.”

“As I read Writing the War, I felt like I was watching the whole American experience of World War II through a magnifying glass. This day-by-day story of one family’s journey is touching, illuminating, and utterly absorbing.”

Thomas Pellechia is an independent writer specializing in food and wine. He has written dozens of freelance magazine articles, has been a newspaper columnist in Western New York for two decades, and is the author of five previous books, most recently, Over a Barrel: The Rise and Fall of New York’s Taylor Wine Company.

David Kiley is a journalist and editor, having held senior posts at USA Today, Businessweek, AOL, the HuffingtonPost, Adweek, and CNN. He freelances for the Chicago Tribune and Automobile Magazine, and is the author of two books on the automobile industry.
Loading...
or
Not Currently Available for Direct Purchase