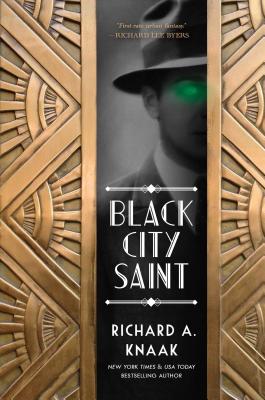 By Richard A. Knaak

For more than sixteen hundred years, Nick Medea has followed and guarded the Gate that keeps the mortal realm and that of Feirie separate, seeking in vain absolution for the fatal errors he made when he slew the dragon. All that while, he has tried and failed to keep the woman he loves from dying over and over. Yet in the fifty years since the Night the Dragon Breathed over the city of Chicago, the Gate has not only remained fixed, but open to the trespasses of the Wyld, the darkest of the Feiriefolk. Not only does that mean an evil resurrected from Nick’s own past, but the reincarnation of his lost Cleolinda, a reincarnation destined once more to die. Nick must turn inward to that which he distrusts the most: the Dragon, the beast he slew when he was still only Saint George. He must turn to the monster residing in him, now a part of him...but ever seeking escape. The gang war brewing between Prohibition bootleggers may be the least of his concerns. If Nick cannot prevent an old evil from opening the way between realms...then not only might Chicago face a fate worse than the Great Fire, but so will the rest of the mortal realm.

Richard A. Knaak is the New York Times- and USA Today-bestselling author of The Legend of Huma, WoW: Wolfheart, and nearly fifty other novels and numerous short stories, including works in such series as Warcraft, Diablo, Dragonlance, Age of Conan, and his own Dragonrealm. He has scripted a number of Warcraft manga with Tokyopop, such as the top-selling Sunwell trilogy, and has also written background material for games. His works have been published worldwide in many languages. His most recent releases include Shade --- a brand-new Dragonrealm novel featuring the tragic sorcerer --- Dawn of the Aspects --- the latest in the bestselling World of Warcraft series, and the fourth collection in his Legends of the Dragonrealm series. He is presently at work on several other projects.

“Black City Saint is first-rate urban fantasy. Richard A. Knaak has mixed myth with real-world history to create a fast-paced, unpredictable story filled with intriguing characters, terrifying monsters, and sinister magic. Readers in search of the next Harry Dresden should join Nick Medea on what is sure to be the first of many adventures.”


“I LOVE this book! Black City Saint is a delightfully creepy and at the same time jaunty urban fantasy, a wild ride through Chicago of the gangster era in which the pace never flags, the stakes get ever higher, and the reader gets to spend time with a truly engaging, intriguing bunch of characters that I for one want to spend more time with. So, sequels please? I’m prepared to beg!”


“There’s a lot to digest in this fast-paced, unpredictable world with a surprisingly well-developed cast of characters, including a lovable shapeshifter, an honest detective in a dishonest city, feirie royalty, and a kelpie made of Lake Michigan waters. Because of many resemblances to Jim Butcher’s Dresden Files, urban fantasy fans will be hoping for more from Nick Medea.”
—Booklist


“Black City Saint is jam-packed with awesome -- cursed Roman emperors, incorporeal dragons, paranormal detectives, a shapeshifter from the Feirie realm trapped inside a dog's body, and one very tormented unsaintly Christian saint -- all set in prohibition-era Chicago. Knaak's latest is fast-paced and funny, frightening and more than a little fiendish, a brilliant mash-up of Ghostbusters, The Da Vinci Code, and the ancient story of St. George and the Dragon.”


“From the first page of Black City Saint to the last, you know you’re in the hands of a creative and expert storyteller. From setting the scenes to populating them with interesting and believable characters, Richard Knaak knows his stuff.”