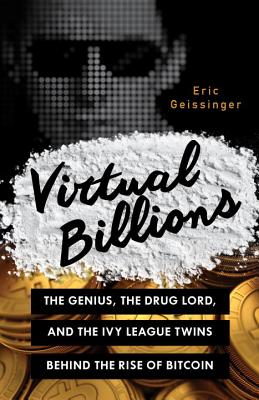 The Genius, the Drug Lord, and the Ivy League Twins behind the Rise of Bitcoin

Bitcoin, the digital currency, was introduced in 2009 with little fanfare; five years later, shocking the world, it was worth $14 billion. This book explores the cyber currency by focusing on the remarkable stories and intriguing personalities of those responsible for its sudden success: Satoshi Nakamoto, the reclusive and anonymous genius who created Bitcoin; Ross Ulbricht, aka the Dread Pirate Roberts, administrator of the largest and most successful Dark Web drug superstore, using Bitcoin to fuel online sale of drugs, hacking services, counterfeit money, and assassinations; and Cameron and Tyler Winklevoss, Harvard graduates, successful litigants vs. Facebook, world-class Olympic rowers, and Bitcoin entrepreneurs who own 1 percent of all bitcoins in existence.

Equal parts The Social Network, Sherlock Holmes, and Breaking Bad, this absorbing narrative tells the stories of the reclusive genius who waged a one-man war against the global banking system (and he's winning); the quiet and affable computer geek who, until his arrest, profited handsomely from Silk Road, his online drug superstore; and the multitalented Harvard twins, who made a fortune from an intellectual-property suit against Mark Zuckerberg, and now are the chief promoters of Bitcoin as "the next big thing."

Bitcoin has introduced us to coke-fueled coding gurus, anger-crazed hitmen-hiring millionaires, and canny "Bitcoin miners" avidly adding processing power to their chilly Icelandic server farms to generate millions of dollars every month. Absurd and almost unbelievable stories abound, and sweep the reader along through the living and breathing, passionate and paranoid insiders who made it all happen.

Eric Geissinger has worked as a technical writer for Silicon Valley software companies for seventeen years. His short fiction and poetry have appeared in several literary journals.  He lives in the Finger Lakes region of New York with his wife and two daughters.

Praise For Virtual Billions: The Genius, the Drug Lord, and the Ivy League Twins behind the Rise of Bitcoin…

“Like The Big Short and Bringing Down the House, Eric Geissinger’s Virtual Billions tackles a fascinating but elusive subject—in this case, Bitcoin—and makes it accessible and entertaining. This is a riveting slice of instant historical journalism about the digital currency that exploded onto the scene in 2009 and in just five years was worth $14 billion.”

“Enthusiastic… [Geissinger’s] account of Bitcoin’s rise is thoughtful and generally precise.... A perceptive early look at the volatile present and seemingly inevitable future of "’crypto-currency.’"