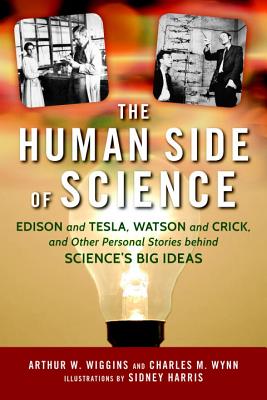 The Human Side of Science (Hardcover)

Edison and Tesla, Watson and Crick, and Other Personal Stories behind Science's Big Ideas

This lively and humorous book focuses attention on the fact that science is a human enterprise. The reader learns about the foibles and quirks as well as the admirable ingenuity and impressive accomplishments of famous scientists who made some of the greatest discoveries of the past and present.

Examples abound: James Watson and Francis Crick formed a legendary partnership that led to the discovery of DNA, but they essentially ignored the contribution of female colleague Rosalind Franklin. Later, in the race to sequence the human genome, Watson criticized J. Craig Venter’s technique as a process that “could be run by monkeys.” Nikola Tesla once worked for Thomas Edison, but then quit after a dispute about a bonus. Robert Hooke accused Isaac Newton of stealing his ideas about optics. Plato declared that the works of Democritus should be burned.

With tongue-in-cheek illustrations by renowned science cartoonist Sidney Harris, this book takes the reader behind the scenes of scientific research to shine new light on the all-too-human people who “do” science.

Arthur W. Wiggins is the author of the Joy of Physics (with cartoons by Sidney Harris) and the coauthor, with Charles M. Wynn Sr., of the The Five Biggest Ideas in Science, Quantum Leaps in the Wrong Direction, The Five Biggest Unsolved Problems in Science, and the textbook Natural Science: Bridging the Gaps. Wynn and Wiggins have also edited And God said, “Let There Be Evolution!”: Reconciling the Book of Genesis, the Qur’an and the Theory of Evolution. Wiggins is Distinguished Professor Emeritus of Physics, Oakland Community College in Michigan.

Charles M. Wynn Sr. is Distinguished Professor of Chemistry at Eastern Connecticut State University. Besides the above-named titles coauthored with Arthur W. Wiggins, Wynn is also the author of Quantitative and Qualitative Experiments for General Chemistry.

Sidney Harris was called “America’s premier science cartoonist” by Isaac Asimov. He has contributed to American Scientist for many years and provided illustrations for The Five Biggest Ideas in Science, Quantum Leaps in the Wrong Direction, and The Five Biggest Unsolved Problems in Science.

Praise For The Human Side of Science: Edison and Tesla, Watson and Crick, and Other Personal Stories behind Science's Big Ideas…

PRAISE FOR THE JOY OF PHYSICS:

“… makes genuine fun out of rigorous science… Wiggins’s friendly, stress-free approach will teach readers how to measure, observe and calculate, and he enriches his study with short history lessons and biographies of physics pioneers... Clever cartoons by Sydney Harris and quotes from such worthies as Jeff Foxworthy provide laugh-out-loud moments, while the very human travails of pioneers like Tesla and Bernoulli remind us that life (and science) is seldom easy, even for geniuses. A welcome volume, Wiggins’s gentle but thorough text could do much to quell perennial student bellyaching over introductory physics courses.”


“…an entertaining, informative romp through electromagnetism and light, dynamics, quantum mechanics and the big bang.”


“Filled with examples and simple demonstrations and experiments you can do yourself, it’s a hands-on approach to the fun of discovery.  Here is a route not only to understanding physics—which, after all, deals with the biggest cosmic questions such as workings of the universe—but doing physics.”


“…conveys the delight of understanding in a way that requires the reader to be comfortable with math no more complex than first-year algebra. Even more appealing is the manner in which the author uses math to explain a series of generally accessible experiments, with instructions that accompany many of the essays. Relevant cartoons by Sidney Harris amuse and enlighten the reader along the way… a fine resource for teachers who need to reinforce their own understanding of fundamental physics. It is a pleasure to read and will help teachers provide answers to students’ questions on the underlying principles of physical science… This book will reinforce the idea that physics is not only an important school subject but that it explains a great deal about the world we encounter every day.”


“…rather than relying just on clear explanations, amazing results and interesting anecdotes to engage readers, The Joy of Physics also takes readers through a series of easy and fun practical experiments – such as demonstrating simple harmonic motion with a yo-yo – that illustrate physical concepts. The book is also peppered with illustrations by the famous science cartoonist Sidney Harris and each chapter begins with a humorous quotation.”