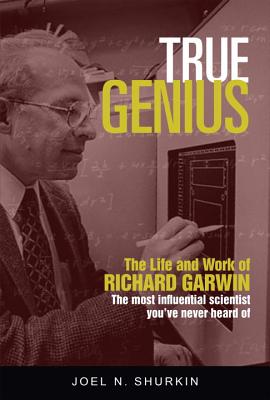 The Life and Work of Richard Garwin, the Most Influential Scientist You've Never Heard of

Called a "true genius" by Enrico Fermi, Richard Garwin has influenced modern life in far-reaching ways, yet he is hardly known outside the physics community. This is the first biography of one of America's great minds--a top physicist, a brilliant technological innovator, and a trusted advisor of presidents for sixty years. Among his many contributions to modern technology are innovations we now take for granted: air-traffic control systems, touch screens, color monitors, laser printers, GPS satellite navigation, and many other facets of everyday contemporary life.

But certainly his most important work has been on behalf of nuclear disarmament. As a key member of the Los Alamos team that developed the hydrogen bomb (he created the final design), Garwin subsequently devoted much of his career to ensuring that nuclear weapons never again be used. He has spent hundreds of hours testifying before Congress, serving on government advisory committees, and doing work that is still classified, all the while working for IBM as a researcher.

A genuine polymath, his ideas extend from propulsion systems for interplanetary flight to preventing flu epidemics. Never shy about offering his opinions, even to rigid government bureaucracies unwilling to change, Garwin continues to show leaders how to do the smart thing. The world is a more interesting and safer place because of his many accomplishments.

Praise For True Genius: The Life and Work of Richard Garwin, the Most Influential Scientist You've Never Heard of…

“This book provides an important correction to the statement in its title that Richard Garwin is ‘the most influential scientist you’ve never heard of.’ In this informative, comprehensive, and interesting book, Joel Shurkin explains why Enrico Fermi called him a genius and why Garwin’s life’s work constitutes a major contribution over a wide range of science and technology that is of great value to the nation and the world. His work should be more broadly recognized now that he has been awarded the Presidential Medal of Freedom.”

—Sidney D. Drell, Emeritus Professor of Physics at Stanford and senior fellow at the Hoover Institution

“Pulitzer Prize–winner Joel Shurkin got the subtitle right, ‘the most influential scientist you’ve never heard of.’ I had never heard of Richard Garwin. And that was my loss, because Shurkin’s incredibly well-written and well-researched book is a compulsive read about a genius who was right there in the designing and making of the H-bomb. The book raises fascinating issues of science and technology and the relationship between them, as well as enough moral issues to keep a philosophy class going for several semesters. Highly recommended!”

“Garwin was and is someone special—a truly remarkable physicist, brilliant and eminently practical. And never afraid to speak directly to authority. Garwin’s greatest service to our science community has been his total commitment to developing the tools that made the use of nuclear weapons (that he helped to develop) unlikely. It’s fascinating to learn of his trajectory in science and public service.”

“This is a book that is long overdue, and it will fill an important gap in the history of science advising in this country. Richard Garwin is not exactly a household name, but in the physics and science and technology policy community, it calls forth a degree of respect and authoritativeness that few can match. Garwin mostly works behind the scenes, often in classified environments, yet his influence on national science and technology matters is astonishing. No less astonishing has been the range of issues he has consulted on: nuclear arms control, supersonic transport, national missile defense, nuclear power, terrorism and weapons of mass destruction, healthcare, satellites, influenza, pollution, and more—such is the breadth of his prodigious brain. Joel Shurkin has chronicled the broad sweep of Garwin’s career, which has lasted over sixty years, with completeness, intelligence, and humanity, and I strongly recommend this book to anyone who wants a window on the history of United States science, technology, and national policy since World War II, and who wants to know how the highly influential voice of one scientist has helped steer the country in the right direction.”

Joel N. Shurkin is a freelance science writer, former science reporter at the Philadelphia Inquirer and part of a team that won a Pulitzer Prize for covering the Three Mile Island nuclear-reactor disaster. He is the author of nine published books on science and the history of science, most recently Broken Genius: A Biography of William B. Shockley. He writes regularly for Inside Science News Service at the American Institute for Physics and has written for Slate, Scientific American, and Science Friday. Among his academic positions have been the Snedden Chair in Journalism at the University of Alaska Fairbanks, the founder of the science-journalism internship program at Stanford University, and science writer emeritus at Stanford University.
Loading...
or
Not Currently Available for Direct Purchase