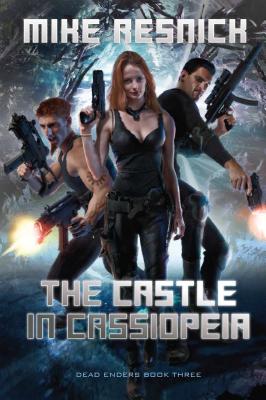 The Castle in Cassiopeia (Dead Enders)

A crisis has arisen. On their first mission as a team, Pretorius and his Dead Enders kidnapped the real General Michkag and substituted a clone who had been raised and trained in the Democracy. But now they find that the clone likes being the most powerful man in the hundred-world Traanskei Coalititon—and having been raised on Earth, he knows how humans think and react. This becomes a many-layered problem for Pretorius and what is left of his Dead Enders. As the only humans on a totally militarized alien world, they must first find where the best-guarded member of the enemy's military - Michkag - is hiding and how many aliens, or regiments, or divisions, are guarding him, and then they must find a way past all his lines of defense to kill or capture him.

Praise For The Castle in Cassiopeia (Dead Enders)…

PRAISE FOR THE WORK OF MIKE RESNICK:


"This is space opera at its best--simultaneously pulse pounding and mind expanding. Resnick is ... the twenty-first century's master of excitement and adventure. Enjoy!"


"Packed with colorful characters and endless invention ... exciting entertainment that hurls along at nearly the speed of light. Someone should make a movie out of this book!"

Mike Resnick has won an impressive five Hugos and has been nominated for thirty-one more. The author of the Starship series, the John Justin Mallory series, the Eli Paxton Mysteries, and four Weird West Tales, he has sold sixty-nine science fiction novels and more than two hundred fifty short stories and has edited forty anthologies. His Kirinyaga series, with sixty-seven major and minor awards and nominations to date, is the most honored series of stories in the history of science fiction.
Loading...
or
Not Currently Available for Direct Purchase