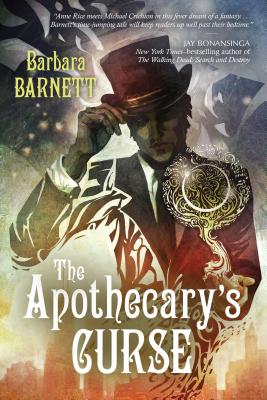 In Victorian London, the fates of physician Simon Bell and apothecary Gaelan Erceldoune entwine when Simon gives his wife an elixir created by Gaelan from an ancient manuscript. Meant to cure her cancer, it kills her. Suicidal, Simon swallows the remainder--only to find he cannot die. Five years later, hearing rumors of a Bedlam inmate with regenerative powers like his own, Simon is shocked to discover it's Gaelan. The two men conceal their immortality, but the only hope of reversing their condition rests with Gaelan's missing manuscript. When modern-day pharmaceutical company Transdiff Genomics unearths diaries describing the torture of Bedlam inmates, the company's scientists suspect a link between Gaelan and an unnamed inmate. Gaelan and Transdiff Genomics geneticist Anne Shawe are powerfully drawn to each other, and her family connection to his manuscript leads to a stunning revelation. Will it bring ruin or redemption?

—Jay Bonansinga, New York Times–bestselling author of The Walking Dead: Search and Destroy and Self Storage

“Looking for a new narrative world lovingly furnished with the craft and care of an older time? This book feels like Holmes.”

—Jane Espenson, writer/producer of Buffy the Vampire Slayer, Battlestar Galactica, and Once Upon a Time

“Myth, medicine, and immortality, braided together like the border of an illuminated manuscript.”

"Part medical drama, part thriller, and completely absorbing. Barnett explores the dark side of one of humanity's oldest obsessions--the quest for immortality--and tells a great story about greed, unintended consequences, and ultimately love."

“An irresistible blend of fairy folklore, science, and suspense that’s sure to keep you reading late into the night.”

"A wonderfully entertaining and richly textured novel--truly 'high concept.' Deft evocation of characters and a wonderfully authentic use of language.... Barbara Barnett appears to really know a lot about chemistry, languages, genetics, mythology, and history"

—Mark Spencer, author of A Haunted Love Story: The Ghosts of the Allen House

"Has something for every fiction fan - sci-fi, horror, romance, and fantasy - but the story interweaves the genres so deftly that the reader is focused on the story - and what a story it is! Barbara's gift for credible, era-specific dialogue and detail is wonderful, as is her pacing and the story's pay-off."

Barbara Barnett is publisher and executive editor of Blogcritics Magazine and the author of Chasing Zebras: The Unofficial Guide to House, M.D. Barbara has won several awards for her writing, spanning from technical writing achievement to her writing on spirituality and religion. Barbara has a degree from the University of Illinois in biology/chemistry and has worked as a microbiologist. She is the current president of the Midwest Writers Association.
Loading...
or
Not Currently Available for Direct Purchase