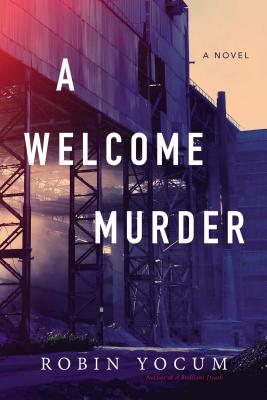 After his unspectacular professional baseball career ends with a knee injury in Toledo, Ohio, Johnny Earl gets busted for selling cocaine. After serving seven years in prison, all he wants to do is return to his hometown of Steubenville, retrieve the drug money he stashed before he went to jail, and start a new life where no one has ever heard of Johnny Earl. However, before he can leave town with his money, Johnny is picked up for questioning in the murder of Rayce Daubner, the FBI informant who had set him up on drug charges in the first place. Then his former prison cellmate shows up--a white supremacist who wants the drug money to help fund an Aryan nation in the wilds of Idaho. Five memorable characters, each with a separate agenda, come together in this layered tale of murder, deceit, and political intrigue.

Praise For A Welcome Murder…

"Clever, well-plotted, and teeming with life siphoned directly from the Ohio Valley. The twists and turns and out-of-character characters make it a whodunit well worth reading.”
―Columbus Dispatch

“Superb…. The narrative fascinates as much for its artfulness as for the revelations that come through the multiple points of view: the splendid pacing, the deceptively simple prose, and the high energy boiling just beneath it all prove addictive. The characters, too, linger in the memory…. The revelation, when it comes at the end, is still kept from most of the characters. But we know, and that’s enough.”

“Yocum releases a farcical basket of deplorables in Steubenville, Ohio, and lets them crawl all over each other in search of criminal advantage…. As if the raucous plot isn't complicated enough, Yocum filters it all through a system of dueling first-person narrators whose perspectives are amusingly at odds with each other to produce a memorably merry tale of murder most richly deserved.”

“Has a wit and quirkiness that serve as reminders that the [Rust Belt] region isn’t so sacred that you can’t bring a little humor to it…. Yocum constructs a madcap yarn around this epicenter of economic depression, shifting narrators across a handful of quirky, hard-bitten residents.”

“A Welcome Murder reminds me how much I love to read. It’s a gritty tale of shattered dreams and desperate measures that bleed out in a dying town where, for some, murder is the only way out—as either corpse or killer. Robin Yocum writes vividly about what he knows, suffusing a bleak landscape with brilliantly conceived and memorable characters and a compelling plot that will keep you reading, and guessing, to the very end.”

"A Welcome Murder introduces a roguish cast of losers, sad sacks, nymphomaniacs, drug dealers, and unscrupulous politicians, all against the backdrop of decay in a once-proud Ohio steel town. The beauty of this engaging jigsaw puzzle of a novel is the rise and fall of fortunes, fueled by ambition, bad behavior, and even worse decisions. Yocum paints the corners of the plate like a Cy Young Award winner, achieving a rare balance between police procedural and social farce that truly works. Rich and complex, A Welcome Murder is a joyful portrait of dreams fumbled and recovered.”

PRAISE FOR A BRILLIANT DEATH:

"[An] engaging coming-of-age mystery.... Travis is a fresh and lovely version of a familiar archetype--the poor kid with a smart mind, good heart, and the drive to stand up to injustice and make a better life for himself.... Yocum continues to write with great tenderness about small-town life in the Ohio River Valley."

"Yocum...creates so much sympathy for his characters in this coming-of-age tale that you hope for an alternate theory to what appears to be the ineluctable facts of a tragedy."

"You absolutely must read A Brilliant Death.... A mystery novel for those who hate mysteries, yet one that could and should be embraced by aficionados of the genre. It's a mystery, yes, but wrapped in a fine, perfectly executed coming-of-age story.... I don't want this one to get past you. I know, there are so many books and so little time. But it is so deserving of your lucre and attention. Exquisitely plotted, wonderfully written, and with the best closing line I've read in a book this year, A Brilliant Death is indeed brilliant."

"As much a coming of age story as it is a mystery, and the two blend incredibly well together, each supporting and enhancing the other. The characters are well-developed, the small town setting accurately depicted, the 1970s time frame providing a perfect backdrop to the action, the storyline intriguing and nicely paced, the outcome a surprise to all involved. In all, a remarkable achievement in storytelling. Highly recommended."

"Although this is a murder mystery at heart (and one with an exciting, unexpected conclusion), it is also a coming of age novel.... Yocum describes the town in great detail, enveloping the reader in the atmosphere of 1970s small town life. We sense the love he has for the town and its people, and for me that was one of the most enjoyable aspects of the book."

"Yocum has again written a captivating mystery that pulls readers in from the very beginning. Mitchell Malone and Travis Baron make a great team, and the juxtaposition of the seriousness of their investigation, along with the daily life of teenagers in the late 1960s, makes this novel come alive. Readers are intrigued and Yocum's timing is perfect as he reveals the mystery around Amanda Baron's death, layer by layer. Four Stars -- COMPELLING "

Robin Yocum is the author of the 2017 Edgar® Award-nominated A Brilliant Death. He is also the author of the critically acclaimed novels Favorite Sons and The Essay as well as Dead Before Deadline... and Other Tales from the Police Beat and Insured for Murder (with Catherine Candisky). The president of Yocum Communications, a public relations and marketing firm in Westerville, Ohio, Yocum is well known for his work as a crime and investigative reporter with the Columbus Dispatch from 1980-1991. He was the recipient of more than thirty local, state, and national journalism awards in categories ranging from investigative reporting to feature writing.
Loading...
or
Not Currently Available for Direct Purchase