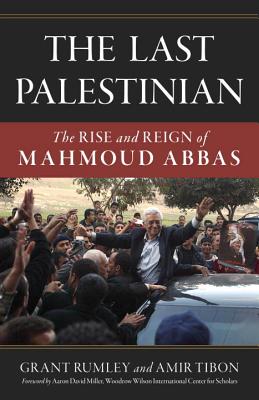 The Rise and Reign of Mahmoud Abbas

Mahmoud Abbas rose to prominence as a top Palestinian negotiator, became the leader of his nation, and then tragically failed to negotiate a peace agreement. This is the first book in English that focuses on one of the most important fixtures of the Israeli-Palestinian conflict. Filled with new details and based on interviews with key figures in Ramallah, Jerusalem, and Washington, this book weaves together a fascinating story that will interest both veteran observers of the conflict and readers new to Israeli-Palestinian history.

The authors, one a research fellow at a nonpartisan Washington think tank and the other an award-winning diplomatic correspondent for Israel's largest news website, tell the inside story of Abbas's complicated multi-decade relationship with America, Israel, and his own people. They trace his upbringing in Galilee, his family's escape from the 1948 Israeli-Arab war, and his education abroad. They chart his rise to prominence as a pivotal actor in the Oslo peace process of the 1990s and his unsuccessful attempt to offer a nonviolent alternative to the Second Intifada.

The authors pay special attention to the crucial years of 2005 to 2014, exploring such questions as: How did Abbas lose control of half of his governing territory and the support of more than half of his people? Why was Abbas the most prominent Palestinian leader to denounce terrorism? Why did Abbas twice walk away from peace offers from Israel and the U.S. in 2008 and 2014? And how did he turn himself from the first world leader to receive a phone call from President Obama to a person who ultimately lost the faith of the American president?

Concluding that Abbas will most likely be judged a tragic figure, the authors emphasize that much of his historical importance will depend on the state of the peace process after he is gone. Only the future will determine which of the emerging schools of Palestinian political thought will hold sway and how it will affect the Israeli-Palestinian conflict.

Praise For The Last Palestinian: The Rise and Reign of Mahmoud Abbas…

“The Last Palestinian is a gripping story, compellingly told. It is required reading for anybody who wants to understand the crisis of the Palestinian national movement and the failure of the peace process.”

“This is a serious political biography of a man whose life embodies the hopes, challenges, struggles, and failures of the Palestinian national struggle. An important account for anyone wishing to understand the history, evolution, and politics of Palestinian peacemaking.”
—Robert Danin, Council on Foreign Relations and Harvard Kennedy School, former Head of the Office of the Quartet Representative, Jerusalem

“This important and fair-minded book adds an important, and badly needed, element to the puzzle of contemporary Palestinian domestic politics. It should be read carefully by everyone who wants to understand the current status of Israeli-Palestinian dynamics and the broader political landscape in the Middle East.”

“Mahmoud Abbas is the last of the generation of Fatah’s founding leaders. Abbas was always outshone by Yasser Arafat and his two key lieutenants—Abu Iyad and Abu Jihad—but he also outlived them to become leader of the Palestinian national movement in 2005. The Last Palestinian is an essential read, for it tells the story of a complex personality—opposed to violence, doggedly in favor of the two-state solution, intent to lead but with a shrinking following—in pursuit of a vision of an independent Palestine that has thus far eluded him. The authors have assembled a textured picture of the man, his strengths and shortcomings, who at age eighty-two continues to lead the Palestinians, albeit in a more authoritarian direction and toward a goal of independence that appears more remote than ever.”

“I have often said that Yasser Arafat had the capability but not the intention to make peace and that Mahmoud Abbas had the intention but not the capability to end the conflict between Palestinians and Israelis. This book, The Last Palestinian, offers an excellent portrait of Mahmoud Abbas. It shows the periods when he demonstrated the courage to argue within the PLO for dealing with Israel and later for opposing terror, especially during the Second Intifada. But it also shows that when his choice was between making peace or accepting his political constraints, he was guided by the latter. For anyone who wants to understand more about the president of the Palestinian Authority and what is happening to the Palestinian national movement, this is a must-read.”

“This is the well-told tale—sad, but immensely consequential—of how Mahmoud Abbas declined from peacemaker to autocrat and took the hopes of Palestinians down with him. Everyone interested in Middle East peace needs to know this story.”

Grant Rumley is a research fellow at the Foundation for Defense of Democracies, where he focuses on Palestinian politics. He has published in leading media outlets including Foreign Affairs, the Atlantic, Foreign Policy, and contributed commentary to the New York Times, Reuters, and Newsweek. Previously, he lived in Jerusalem, where he founded and edited The Jerusalem Review of Near East Affairs. Prior to that, he served as a consultant on Middle East issues in Washington, D.C.

Amir Tibon is an award-winning Israeli journalist and current chief Washington correspondent for Haaretz, Israel's paper of record. Prior to that, he was a diplomatic correspondent for a leading Israeli news website where he extensively covered the Israeli-Palestinian peace process. His writings on Israel, the Palestinians, and U.S. foreign policy in the Middle East have been published in the Atlantic, Foreign Affairs, Politico Magazine, the New Republic, Tablet Magazine, and and other leading U.S. publications.
Loading...
or
Not Currently Available for Direct Purchase