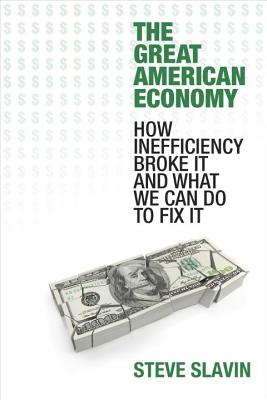 Many Americans feel that the economy is no longer working for them and that "the American Dream" has become a sham. This book explains the underlying reasons for this gloomy outlook and lays out a clear plan for making the American economy work for everyone, not just the top 1 percent.

The heart of the problem, says economist Steve Slavin, is gross inefficiency. Since the end of World War II, America has been wasting vast amounts of its resources. As examples he cites the following key sectors:

• Healthcare--we spend nearly twice as much as other industrialized nations but achieve no better results;

• Education--just half of our eighteen-year-olds can function at an eighth-grade level, while many European and Asian countries do far better educating their young people;

• Transportation--by relying on cars instead of mass transit, we spend much more than comparable nations;

• The military--several decades after the Cold War our military budget continues to be almost 40 percent of the world's total military spending, while few politicians ever question the necessity for such massive outlays.

In these areas and other sectors of the economy, Slavin proposes sweeping changes to eliminate inefficiency. These would include a restructuring of our healthcare system to make it affordable for all, a major push toward public transportation, increased emphasis on quality results from our education system, ways to eliminate waste throughout our vast military-industrial complex, and a renewed emphasis on manufacturing.

Refreshingly clear and readable, The Great American Economy will appeal to readers who want to learn what went wrong with our economy and how to fix it.

Praise For The Great American Economy: How Inefficiency Broke It and What We Can Do to Fix It…

“Shackled by ignorant schools, an unwell system of healthcare, a carceral state of criminal proportions, and a morbidly obese military industrial complex, the US economy stumbles along, literally on borrowed time. Forewarned but ineptly led, Americans have hitherto chosen complacency over reform. Steve Slavin’s book may be their last chance to rescue prosperity from the clutches of economic degeneration.”

—Robert E. Wright, author of Fubarnomics and The Poverty of Slavery

"Slavin presents an impressive account of the enormous inefficiencies in the American economy. This finding belies the common assumption that free-market economies are fundamentally efficient. Although disagreement can be expected about some claims of inefficiency (as one person’s inefficiency is often another person’s job), the cumulative effect of Slavin’s book is to jolt readers into skepticism about claims of free-market efficiency and thereby provoke a national conversation about our economy so as to reduce its self-destructive tendencies.”

Steve Slavin, PhD, is the author of fifteen economics and math books, including two college texts, Economics (now in its eleventh edition), and Wiley Pathways Business Math (with Tere Stouffer), as well as the bestselling All the Math You'll Ever Need. He taught economics for thirty-one years at Union County College, Brooklyn College, and New York Institute of Technology.
Loading...
or
Not Currently Available for Direct Purchase