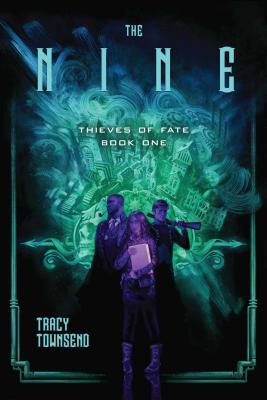 In the dark streets of Corma exists a book that writes itself, a book that some would kill for... Black market courier Rowena Downshire is just trying to pay her mother’s freedom from debtor's prison when an urgent and unexpected delivery leads her face to face with a creature out of nightmares. Rowena escapes with her life, but the strange book she was ordered to deliver is stolen. The Alchemist knows things few men have lived to tell about, and when Rowena shows up on his doorstep, frightened and empty-handed, he knows better than to turn her away. What he discovers leads him to ask for help from the last man he wants to see—the former mercenary, Anselm Meteron. Across town, Reverend Phillip Chalmers awakes in a cell, bloodied and bruised, facing a creature twice his size. Translating the stolen book may be his only hope for survival; however, he soon realizes the book may be a fabled text written by the Creator Himself, tracking the nine human subjects of His Grand Experiment. In the wrong hands, it could mean the end of humanity. Rowena and her companions become the target of conspirators who seek to use the book for their own ends. But how can this unlikely team be sure who the enemy is when they can barely trust each other? And what will happen when the book reveals a secret no human was meant to know?

Praise For The Nine (Thieves of Fate #1)…

"The Nine is a tense, fast-moving and twisty caper, with divided loyalties, creepy monsters, and grand mysteries. More please!"

“An inventive alloy of low-fantasy grit and saucy gaslamp caper, by turns both uplifting and brutal—I dug the world, I loved the characters, and I definitely want to know what happens next.”

“George R. R. Martin and China Miéville have nothing on the audacious, intricate world-building, gritty politics, and compelling characters in this excellent debut.”

Debut author Tracy Townsend holds a master's degree in writing and rhetoric from DePaul University and a bachelor's degree in creative writing from DePauw University, a source of regular consternation when proofreading her credentials. She is chair of the English Department at the Illinois Mathematics and Science Academy, an elite public boarding school, where she teaches creative writing and science fiction and fantasy literature. She has been a martial arts instructor, a stage combat and accent coach, and a short-order cook for houses full of tired gamers. Now she lives in Bolingbrook, Illinois with two bumptious hounds, two remarkable children, and one very patient husband. Her short story "Late Arrivals" was published by Luna Station Quarterly in March 2016.
Loading...
or
Not Currently Available for Direct Purchase