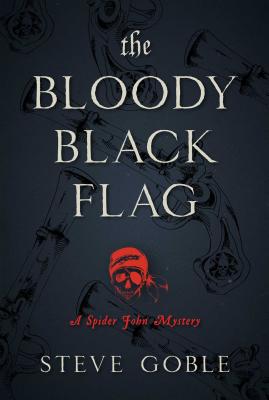 Agatha Christie meets Patrick O'Brian in the first book in a new series of swashbuckling historical mysteries featuring Spider John Rush, a most reluctant pirate. 1722--aboard a pirate ship off the American Colonial Coast. Spider John Rush never wanted to be a pirate, but it had happened and he'd learned to survive in the world of cut and thrust, fight or die. He and his friend Ezra knew that death could come at any moment, from grapeshot or storm winds or the end of a noose. But when Ezra is murdered in cold blood by a shipmate, Spider vows revenge. On a ship where every man is a killer many times over, how can Spider find the man who killed his friend? There is no law here, so if justice is to be done, he must do it. He will have to solve the crime and exact revenge himself. One wrong step will lead to certain death, but Spider is determined to look into the dying eyes of the man who killed his friend, even if it means his own death.

Steve Goble is the author of The Bloody Black Flag and The Devil's Wind in the Spider John mystery series. A former journalist, Goble now works in communications for a cybersecurity firm. Previously, he wrote a weekly craft-beer column called Brewologist, which appeared on USA Today Network–Ohio websites.

Praise For The Bloody Black Flag: A Spider John Mystery…

“This original, gritty, action-packed debut is rich in historical detail. Suggest for readers who enjoy the Pirates of the Caribbean movies or Patrick O'Brian's seafaring adventures.”

“This book succeeds in ways that a conventional mystery novel couldn’t even approach. The dialogue is wonderful, the sense of place extraordinary. A marvelous novel.”

—Nicholas Guild, author of The Assyrian and The Blood Star

"A fast-paced mash-up of a rip-roaring pirate yarn mixed with a suspect-rich whodunit story. Gritty in detail, fanciful in conception, the novel is, above all else, a lot of fun.”

—Gordon McAlpine, author of Hammett Unwritten and the Edgar® Award–nominated Woman with a Blue Pencil

“A page-turning, high seas adventure filled with pirates, murder, and mystery. Steve Goble’s debut novel is a thrilling, action-packed adventure featuring a piratical sleuth whose wits are as sharp as his blade.”

“Steve Goble’s debut novel is a rollicking tale of murder and mayhem. He tells a pirate tale like no one else has ever done before. It’s unique, original, and all told with the deft hand of an emerging master storyteller. The best thing about this novel? There will be more Spider John books. I can’t wait to go on another pirate adventure with this likeable, but dangerous, crew.”

—Larry D. Sweazy, award-winning author of Where I Can See You
or support indie stores by buying on
Copyright © 2020 American Booksellers Association