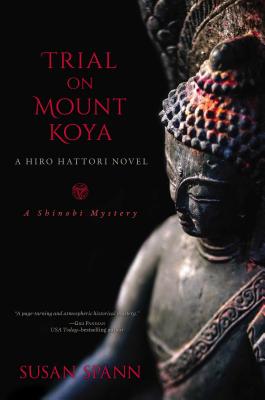 Master ninja Hiro Hattori and Jesuit Father Mateo head up to Mount Koya, only to find themselves embroiled in yet another mystery, this time in a Shingon Buddhist temple atop one of Japan's most sacred peaks. November, 1565: Master ninja Hiro Hattori and Portuguese Jesuit Father Mateo travel to a Buddhist temple at the summit of Mount Koya, carrying a secret message for an Iga spy posing as a priest on the sacred mountain. When a snowstorm strikes the peak, a killer begins murdering the temple's priests and posing them as Buddhist judges of the afterlife--the Kings of Hell. Hiro and Father Mateo must unravel the mystery before the remaining priests--including Father Mateo--become unwilling members of the killer's grisly council of the dead.

Praise For Trial on Mount Koya: A Hiro Hattori Novel (A Shinobi Mystery #6)…

“A page-turning and atmospheric historical mystery that beautifully melds fascinating Japanese history with a cleverly constructed mystery reminiscent of And Then There Were None—if the famous Agatha Christie mystery had been set in medieval Japan on a sacred mountaintop during a snowstorm.”

“Susan Spann is up front in saying that Trial on Mount Koya is an homage to Agatha Christie. Believe me, she does the great Dame Agatha proud. This excellent entry in Spann’s series of Hiro Hattori mysteries offers plenty of esoteric clues and red herrings that are fun to chase. Along the way, she even does Christie one better, giving readers a fascinating glimpse of life and religion in feudal Japan. This is a book sure to please Spann’s growing legion of fans as well as anyone who loves the work of Agatha Christie.”

“Spann writes with careful attention to dialogue and setting. Though the interactions feel contemporary, each scene is set like a paneled Japanese painting from the era. Fans of this series, and of similar series set in medieval Japan by Laura Joh Rowland and I. J. Parker, will appreciate Spann’s clever homage to the locked-room mystery.”

Susan Spann is the 2015 Rocky Mountain Fiction Writers' Writer of the Year and the author of five novels in the Shinobi Mystery series: Claws of the Cat, Blade of the Samurai, Flask of the Drunken Master, The Ninja's Daughter, and Betrayal at Iga. She has a degree in Asian Studies and a lifelong love of Japanese history and culture. When not writing, she works as a transactional attorney focusing on publishing and business law, and raises seahorses and rare corals in her marine aquarium.
Loading...
or
Not Currently Available for Direct Purchase