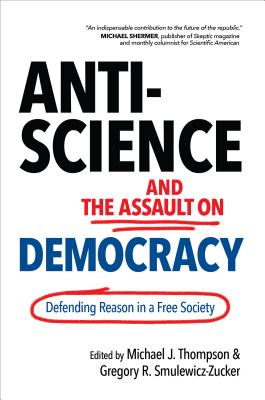 Anti-Science and the Assault on Democracy

Defending Reason in a Free Society

Defending the role that science must play in democratic society--science defined not just in terms of technology but as a way of approaching problems and viewing the world.

In this collection of original essays, experts in political science, the hard sciences, philosophy, history, and other disciplines examine contemporary anti-science trends, and make a strong case that respect for science is essential for a healthy democracy.
The editors note that a contradiction lies at the heart of modern society. On the one hand, we inhabit a world increasingly dominated by science and technology. On the other, opposition to science is prevalent in many forms--from arguments against the teaching of evolution and the denial of climate change to the promotion of alternative medicine and outlandish claims about the effects of vaccinations. Adding to this grass-roots hostility toward science are academics espousing postmodern relativism, which equates the methods of science with regimes of "power-knowledge."
While these cultural trends are sometimes marketed in the name of "democratic pluralism," the contributors contend that such views are actually destructive of a broader culture appropriate for a democratic society. This is especially true when facts are degraded as "fake news" and scientists are dismissed as elitists. Rather than enhancing the capacity for rational debate and critical discourse, the authors view such anti-science stances on either the right or the left as a return to premodern forms of subservience to authority and an unwillingness to submit beliefs to rational scrutiny.
Beyond critiquing attitudes hostile to science, the essays in this collection put forward a positive vision for how we might better articulate the relation between science and democracy and the benefits that accrue from cultivating this relationship.

Praise For Anti-Science and the Assault on Democracy: Defending Reason in a Free Society…

“Since the birth of the United States, science and democracy have been inextricably intertwined, feeding one another and bending the arc of the moral universe ever upward. Unfortunately, when scientific facts conflict with deeply held religious or political beliefs, it is almost always science that gets sacrificed. What can we do about this problem? Anti-Science and the Assault on Democracy provides a multitude of voices on causes and solutions. It is an invaluable volume that should be on the desk of all 535 members of Congress, every state governor, and every member of the presidential administration, including and especially the president himself. An indispensable contribution to the future of the republic.”

—Michael Shermer, publisher of Skeptic magazine, monthly columnist for Scientific American, Presidential Fellow at Chapman University, and author of The Believing Brain, The Moral Arc, and Heavens on Earth

“This book astutely diagnoses one of the main ailments afflicting democracy in our post-truth world—the overvaluing of feeling, intuition, and first-person experience. As a corrective for the relativism, cognitive bias, and motivated reasoning of subjective perception, it offers a more reliable prescription: apply to public discourse the scientific method of critical thinking, empirical evidence, and rigorous peer review.”

“Democratic civilization is fragile, just a set of agreements and choices made moment by moment, mind by mind. When those minds cannot distinguish between good and bad evidence for a claim, pseudoscience and anti-science rise. The principles of scientific inquiry can be grasped by a kindergartner but must be continuously reinforced. Anti-Science and the Assault on Democracy helps to instill these principles.”

“As scientific institutions find themselves operating in increasingly difficult environments, questions about science and politics, and science and democracy in particular, keep coming to the fore. The essays in Anti-Science and the Assault on Democracy confront these questions directly, in full understanding of their importance for our civilization. The contributors do not represent any single perspective, but this makes the collection even more vital for anyone who wants to explore the current debate.”

“Anti-Science and the Assault on Democracy passionately proclaims that the only hope for democracy is a rebirth of the scientific attitude among citizens, for how else can people make the right decisions other than by knowing the truths about the world? Anti-science, coming from the political right and from the left, is nothing new, but it must be continually opposed; the struggle is never over. This book’s contributors come from diverse disciplines and cover everything from the theoretical foundation of science and freedom to the most current crises.”

—Stanley A. Rice, Professor, Southeastern Oklahoma State University, author of Scientifically Thinking: How to Liberate Your Mind, Solve the World’s Problems, and Embrace the Beauty of Science

Michael J. Thompson is professor of political theory in the department of political science at William Paterson University. He is the founding editor of Logos: A Journal of Modern Society and Culture; the author of four books, including The Domestication of Critical Theory and The Politics of Inequality; and the editor of eight previous books, including The Palgrave Handbook of Critical Theory.

Gregory R. Smulewicz-Zucker is a graduate student in the Department of Political Science at Rutgers University, New Brunswick. He is the managing editor of Logos and the editor The Political Thought of African Independence; Strangers to Nature: Animal Lives and Human Ethics; and Radical Intellectuals and the Subversion of Progressive Politics (with Michael J. Thompson).