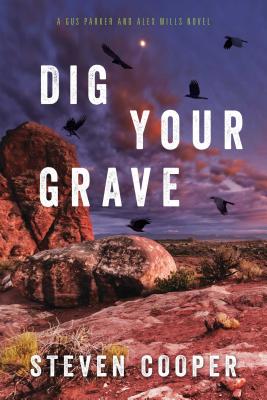 Detective Alex Mills turns to psychic Gus Parker to help him solve a series of baffling murders perpetrated by a deranged killer who leaves his victims' bodies and taunting clues in the cemeteries of Phoenix, AZ. A killer is on the loose, leaving fresh bodies among the dead in Phoenix cemeteries, and marking the murders with ghoulish signs that warn of more evil to come. It's a crude camouflage that has Detective Alex Mills stumped. As he has done before, Mills turns to his buddy, the reluctant psychic Gus Parker. His visions, as cryptic and baffling as they sometimes are, mean something. But just as the investigation heats up, and Mills needs him most, Gus Parker receives ominous threats from a mysterious source. Is this a crazed fan who is trying to get to Gus's love interest, rock-and-roll legend Billie Welch? Or are these threats related to the spree of cemetery killings? There are nefarious secrets hiding in the shadows of the valley's most well-heeled neighborhoods, and some of the most prominent residents have the most to fear.

Praise For Dig Your Grave: A Gus Parker and Alex Mills Novel…

“With its lyrical writing and deep understanding of human behavior, this is one of the best police procedurals I’ve read in years. The Arizona desert landscape provides a luminous backdrop for the ingenuous plot. The hint of the paranormal is so deft you’d swear it must be real. Mills (the relentless homicide detective) and Parker (his psychic friend) are finely drawn characters, sure to take their place with the classic duos.”

“When men forced to dig their own graves are found dead in Phoenix cemeteries, Detective Alex Mills and his psychic source, Gus Parker, have to puzzle out the past, present, and future of the murderer who connects them. Cooper’s style is at times scorching and at other times wry; a pleasure to read.”

Steven Cooper is a freelance writer, video producer, and the author of four previous novels. A former television reporter, he has received multiple Emmy awards and nominations, a National Edward R. Murrow Award, and Associated Press awards. He taught writing at Rollins College (Winter Park, FL) from 2007 to 2012.
Loading...
or
Not Currently Available for Direct Purchase